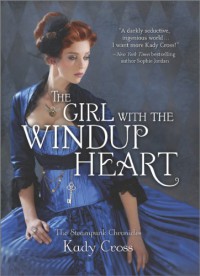 When my wife's friend recommended this series to us, I didn't even notice it was published by Harlequin Teen until I was well into the first (and best) of the series.  By contrast, I don't think there was a page in this one that didn't scream Harlequin, Teen, or both.  Still, I'd enjoyed this X-Men in Steampunk Victorian England series up til now, so I persevered.  But I'd read about half of the novel before I really "got into" the story.

There were basically two storylines in this novel -- the B story (oddly, the one the book is titled for) is all about the highly advanced automaton that Jack discovered in the previous novel becoming a "real life girl" -- just like her favorite, Pinocchio.  There were some interesting moments in this story -- and if it had been given more time to breathe -- maybe taking place over a few weeks, rather than a couple of days -- I'd have bought it and been invested in it.

The A story was even more rushed.  Further proof that you can't keep a bad man down, The Machinist is back -- again.  This time, a full-fledged resident of the Aether, he kidnaps Griffin and begins to exact his revenge.  Finley goes off to rescue him -- with a little technical support from her friends.  This is one of the bigger problems with this installment -- the series is strongest when it's dealing with all the interpersonal relationships -- not just the romantic ties -- seeing the characters interact with each other.  There was so little of that this time, it felt like a different series.  Sam didn't get to be too Sam-ish.  Both he and Emily mostly worked behind the scenes -- ditto for Jasper and Wildcat (when they weren't off helping Jack in the B story). Emily and Finley got 1 or 2 good scenes together, but that's about it.

Anyway, Finley goes off to save Griffin and runs into a couple of blasts from the past.  One of which was simply an unnecessary plot complication -- and was dispatched as such.  The other was probably the best part of this book. Probably its saving grace.

Initially, I was disappointed to read that this was the conclusion to the Steampunk Chronicles.  But by the end, I think it's time -- and clearly Cross did, too.  There's no getting around the idea that she was wrapping things up (and rushed a few things to get to that point).  Still, readers that have been with Griffin's little crew up to this point will appreciate seeing how things end.  The book may have been not terribly impressive, but the series as a whole was still a fun Steampunk-ish tale.  Because of the aforementioned saving grace and the series as a whole, I'll give this 3-stars.  It should probably get 2 - 2.5.