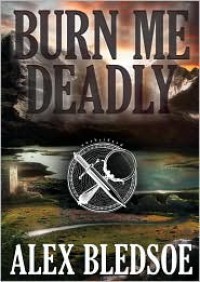 One night, riding outside of town on a routine job Eddie LaCrosse comes across a woman in pretty rough shape. She's naked, bruised, cut and burned—many of the burns look skillfully inflicted, as are all the rest of her injuries. Whoever worked her over knew what he was doing. A damsel in a lot of distress and after a brief conversation, Eddie offers to help her get away from whoever did this and protect her.

Then he's struck from behind and wakes up as someone's captive—she's there, too. Not long after that, he wakes up again, at the bottom of a cliff, barely alive. The damsel didn't fare that well. Once he's patched up well enough to move and think, Eddie sets out to find out who she was, who killed her—and nearly him—and get a little revenge.

His search puts him in the way of one of the strongest criminal figures in his neck of the woods (a man that Eddie would've been happy never to have crossed paths with) and a government official trying to stop his investigation. Then an old friend of Eddie's is killed, and that may be related to his case. Which sends him off into several other directions—including a new dragon-worshiping cult that's somehow tied to the crime boss.

Eddie scoffs at the idea behind this cult—who, in his enlightened age, still believes in dragons? Eddie's skepticism (that word's too mild, but I can't come up with a better one) seems out of place for someone reader know has known both a deity and a man who has lived centuries. Whether or not he's right to disbelieve, the worshipers seem more than a little out to lunch, and are clearly easily manipulated.

There are a few good fight scenes, some good character growth and development since the last book (noteworthy because Eddie seemed to be dead-set against growth and development at the beginning of that novel). Liz, the courier we met at the very end of the first novel, is still around and is a huge part of Eddie's life. We get a taste of that, but not as much as I'd have liked (for good reasons, I should add, I'm not saying that Bledsoe wasted her).

I think this might be a better novel than The Sword-Edged Blonde—the story's a bit tighter, Eddie doesn't engage in any casual cruelty, the characters are better developed (just a bit). But I don't like it as much (each of the three or so times I've worked through the). There's a missing je ne sais quoi to this, however, that restrains my enthusiasm. Do I recommend it on its own merits? Yeah. Do I recommend it as a necessary installment in this series? Definitely—read them all.

I've only re-read the first two novels up to this point, when I move on to book three in a month or so, it'll be the first time I revisit it, and I'm really looking forward to that. It's possibly the best of the series—at the least, I remember it being a step above this.