Prescient. Gripping. Haunting. Unpredictable. What stories should be. 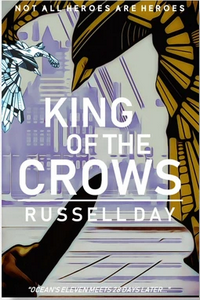 ... for me at least, the first week of the Lockdown was the worst.

Knowing it had happened to me. I hadn’t escaped, I wasn’t one of the lucky ones. Lucky to be safe or lucky to be dead. Take your pick. I was neither.

That right there gives you a pretty good idea what kind of light and fluffy read this is going to be.

There are two timelines in this story—the primary focuses on a post-pandemic London, while the other shows what happened to a couple of the characters mid-pandemic (with plenty of material describing what the pandemic was like for others). In the primary timeline, Europe is a disaster—a "wasteland"—and eight years after the Outbreak, it's beginning to put itself back together. But it's going to take a long, long time to recover from this. Don't let the fact that "eight years after" this fictional outbreak is 2028 bother you at all.*

* Good luck with that. I'll get back to this in a bit.

I'm not going to try to list all the various ways that Day uses to tell this story: I'm certainly going to forget several. So here's a partial list: here's a third-person 2028 narrator describing a police investigation, a first-person perspective on the same investigation; a first-person account of that same detective's life during the Outbreak; selections from a screenplay made about a group of Londoners during the Outbreak; selections from the Outbreak-memoir of one of those Londoners; and third-person narration of the same (N.B.: these three will vary in telling ways); redacted 2028 prison correspondence about the Outbreak; excerpts from scholarly works on aspects of the Outbreak (including a very illuminating work on the slang of the time); graffiti from 2021; internet message boards. Day weaves these together to tell his story, build the world, and help you to understand it. Frequently, I read something from the 2028 timeline, and understood it—only to find a new depth to it several pages later after getting another piece of the puzzle from 2020/2021. It's hard to juggle that many narrative forms/voices/perspectives/calendars as a reader or a writer—Day pulled it off better than I did (any problems I had following things I attribute to myself, and it was pretty easy to clear out my misunderstanding with a minimum of backtracking*). It definitely helps paint the picture of the scope and variety of effects the sickness had on the world more efficiently than a consistent first- or third-person narrative would be able to.

* This would be easier in hardcopy than on an e-reader in my opinion. But that's just a guess.

There are times (several of them) when I felt that the characters were getting lost amongst the plot and worldbuilding and sickness. But when I stopped and thought about it—and eventually got to the point where I didn't have to—I realized I had a pretty solid idea about who these people were and was more invested in them than I expected. I thought there was so much going on that the people were getting hidden, but really, Day's work was subtle—working in the characters into my subconscious like you give a dog its medicine. Normally, this isn't something I require (or would like)—and it's not Day's usual M. O. (quite the opposite), but I think this approach really fit the novel and the story/world.

“They weren’t zombies,” he says, softly. “Don’t call them zombies.”

No one who was involved in the Outbreak for real uses the zee word.

So exactly what was the sickness?

I remember reading a couple of years ago about these ants that would succumb to a fungus which would short-circuit their brain and make them do certain things before killing them—or something like that, vague memories here. Then there were stories about parasites controlling the host's actions—both of these stories had their 15 seconds of fame on social media around the same time (I may be messing the details up a little bit, but I'm not writing history here).

In Day's world, one of these kinds of parasites will reside—asymptomatically, I should stress—in cats, who would pass it on to humans. Skipping the details, the humans would get very sick and then, survivors would maybe succumb to a psychosis that would make them violent. This sickness, HV-Tg (Human Variant-Toxo gondii), in a little more than a year would kill more than 20 million in Europe (at least 33% of France's population) Et voilà!—an easy to believe pandemic that results in Zombie-like people wandering around.

Now, if one of those who'd "switched" and become violent infected you during an assault, well, you were likely to succumb. There were enough of these ("psychos" or "Gonzos"), and the sickness was so widespread, that the police and military couldn't keep up, that civilians were forced to take action and defend themselves, their family and neighbors. People quickly forming into gang-like associations for mutual protection. It was a literal kill-or-be-infected (and likely killed) situation.

One such association became known as The Crows or The Kings of the Crows. They developed a legendary status mid-and post-Outbreak—and are the subjects of the memoir and film mentioned above. One of their number who happened to survive (and gain notoriety enough to get a publishing deal for a memoir) is the subject of the 2028 investigation. They survived the worst of the worst in one of the hardest-hit cities. They did so via means and methods that many (including their own) would find deplorable, but under circumstances that not only permitted, but required, those actions.

We also see what happens to an American in Paris for work when the Outbreak reaches the point that International travel is canceled (particularly to the U.S.). Her allies will never be considered the Kings of anything, and the contrast between how she survives to what the Crows do is pretty striking.

In 2028...eh...you know what? You should read that for yourself. I'm going to say something I'll regret.

The biggest killer in those days wasn’t the disease or the psychos, it was stupidity.

However, it has been pointed out by many historians, logic was one of the first casualties of the Outbreak.

Some of the best moments of this book have nothing to do with advancing the plot, they're little bits showing what the world of the Gondii-pandemic looks like. The man telling the story about taking his girlfriend to the ER because of a burn—how they were treated, and how she became infected. The soldiers coming back from a Middle East deployment being completely unprepared for what had happened to their home country. The mother and son who traveled with the Crows for awhile.

Ultimately, it's not the story you think you're getting...or is it? The marketing tag line is, “Ocean’s Eleven meets 28 Days Later.” It is, all things considered, a good, catchy line. I'm not sure it's all that accurate a description of the novel (but it's not inaccurate). What it is, really slides up on you—and when you see it it feels like it was obvious all along (even if you wouldn't have said that 20 pages earlier). There's a straightforward crime story at the heart of this novel—it's just surrounded by so many layers, that you can miss it—there's the sickness, there's the horrible social and political context (both mid- and post-Outbreak), there's what the characters are going through otherwise—and the whole thing is drenched in social commentary about 2020 society, e.g., sexism, economics, medical care.

And that's not even touching the context we're reading it in now. I truly wonder what I'd think of this book if I'd read it last Fall. I'd still like it, I'd still be impressed by it—but I don't know if it would resonate with me the same way. There's almost nothing about Gondii that's comparable to COVID-19. But the way that people and governments respond—well, that's pretty different, too. but if you can't see what's going on around us reflected in this novel? You're not paying attention. That Day appears so prescient says something about his skill and observation (and a lot about Western culture, too).