High Stakes Danger for Lori Anderson in the Windy City 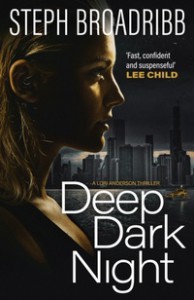 I’ve always felt an element of fear about the jobs I do. In the right dosage it can help you. It gets your adrenaline firing, makes you think clearer, faster—gets you alert and ready to tackle anything that comes your way. But if the fear builds too much, all that good stuff swings things around; the nerves make you hesitant, jumpy and too cautious. That’s when you start making mistakes. And mistakes, in my world, can be fatal.

After barely getting to take a breath following the events of Deep Dirty Truth, Lori finally gets the chance to work off her debt to FBI Agent Monroe. This puts Lori and JT in Chicago trying to get the mobster Cabressa to take possession of some stolen goods. Once that's done, a series of dominoes will fall and Monroe will be able to put him away for a very long time.

So he insists, anyway.

Step one involves Lori getting an invite to an incredibly exclusive Poker game, Step two involves giving her a crash course in playing Poker so she seems mostly credible in the game. (this isn't presented as a comedic segment, but I chuckled at this part of the book—also, I'm jealous, I wish I could learn how to play like this).

Now, every thriller reader knows what will happen next—no plan, no matter how thorough, how well-thought-out no matter who's involved, will work. If for no other reason than it would produce a dull novel. But also, every thriller reader has heard the line, "no plan survives first contact with the enemy" and knows it to be true. The questions that need to be answered are: how badly will the plan go awry? and How will Lori and JT react to it?

So let me assure you, when this plan is derailed, it's derailed in a spectacular fashion, providing a lot of danger for our heroes, peril for those around them, and more than enough tension to satisfy a hungry reader. Lori and JT respond appropriately, not perfectly (which would be boring), but they display the stamina, resourcefulness, and tenacity we've come to expect from them.

The poker game collected quite the interesting mix of players—sports figures, politicians, as well as shady characters like Cabressa. When things go wrong during the game, it opens things up for a lot of drama and conflicting interests causing trouble for all involved. Suddenly, Lori and JT can't focus solely on getting Cabressa to fall into Monroe's trap—they have to worry about survival—their own, and as many others that they can help. Sure, Cabressa is still their target, but there's a lot they have to go through before they can make him a priority.

I'm not going to get more in-depth than that, I'll leave it there and say there's more than enough going on plot-wise to fuel a book at least half again as long as this one. Broadribb has stacked the deck against the pair and it's great to watch them try to navigate the situation.

The game takes place at the top of a pretty high building in Chicago and the action centers around that location, stories above the ground. In the real world, I'm pretty acrophobic—and occasionally (okay, more than occasionally), a movie can get me to feel the anxiety that heights can bring out in me. I don't remember ever feeling symptoms while reading a book, but I did here. It's not like Broadribb focused all that much on the height and risk of falling (it was there, but she didn't belabor the point), but something about the way that she told the story, flicked that particular switch in my brain. There's something very disconcerting about sitting in a comfortable seat (on the ground level like a sane person) but feeling like I was standing in a precarious* location several feet off the ground. I'm not promising that anyone else will experience what I did, I assume the rest of humanity is a bit better adjusted than I am, but for me that was an unexpected "bonus" to the book.

* Yeah, fine, my definition of a precarious location applies to perfectly safe—even benign—spots.

I'm a little worried about the long-term health of Lori's elbows. She uses them so often as weapons, she probably heads back to Florida with at least one of them horribly bruised. I don't remember this being the case in the previous novels, maybe I just forgot—or maybe she's just relying on the technique in these circumstances (I remember more than once the narration in a Jack Reacher novel talking about the usefulness of that tactic compared to the use of a fist).

As far as long-term character development goes, Lori and JT start a conversation they've needed to have since, well, since we met the two of them about Dakota and why Lori didn't tell JT about her before she did. This will prove helpful in the future and provide the opportunity for the relationship to grow and change. The two of them have some sort of plan going forward about their careers and daughter, but we're going to have to come back to find out what they have in mind. Seeing these two deal with each other and their daughter is almost as rewarding to me as the action-hero kind of thing is, and Broadribb's featuring both sides of Lori like this is a real strength of the series.

For my money, this is the best of the series—she's got a real handle on these characters by now and knows just how to put them through the wringer in a way that provides real tension and thrills. I got more wrapped up in this than I expected to (and I had pretty high expectations at this point in the series), and it was absolutely worth it. Book five cannot arrive soon enough for me.

If you haven't met this bounty hunter yet, you need to—either in the pages of this book or the beginning, either would work (but you might as well just buy the set all at once, you won't be satisfied until you read them all). Deep Dark Night will win Broadribb some new fans and confirm those readers already along for the ride.