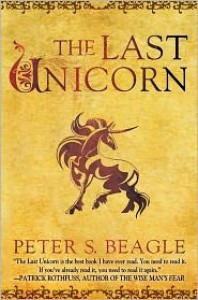 The true secret in being a hero lies in knowing the order of things. The swineherd cannot already be wed to the princess when he embarks on his adventures, nor can the boy knock on the witch's door when she is already away on vacation. The wicked uncle cannot be found out and foiled before he does something wicked. Things must happen when it is time for them to happen. Quests may not simply be abandoned; prophecies may not be left to rot like unpicked fruit; unicorns may go unrescued for a very long time, but not forever. The happy ending cannot come in the middle of the story.

This is the tale of a Unicorn—quite possibly the last in the world (hence the title). On some random day, she discovers that she might be the last of her kind, and so leaves her forest to go throughout the world, searching for others of her kind.

She falls into some trouble after a while, and is helped out by a magician she comes across who ends up traveling with her, as well as a woman associated with a band of outlaws who is looking to get away from them. They travel until they find the cause of the disappearing unicorns and seek to return them to the world.

This is some of the best prose that I read this year. The language is just beautiful. There were several times I had to stop and reread a sentence/paragraph/passage three or four times because it was so good. More than once, I had to force myself to move on or I'd never have made any progress in the book.

That little quotation at the beginning is just a taste of the meta-commentary on fairy tales (specifically) or story (in general) scattered throughout the book. I laughed a lot at some of them, and thought all were very thought-provoking. It's like a more ambitious The Princess Bride in this regard (probably others, too, now that I say it, but I don't have time to tease this idea out).

I dug the characters—Schmendrick the Magician (the world's worst) was wonderful. Molly Grue is an inspired creation, and the kind of character more people need to write. And, of course, the Unicorn herself...

There were several scenes that were just delightful—unique, entertaining. When not unique, Beagle is playing with, twisting, riffing on fantasy/fairy tale mainstays.

But when you put them all together . . . I just didn't see the point. A combination of these characters, these scenes, and the meta material alone should've been a home-run for me. Throw in that language? I should be making plans to re-read it regularly. But somehow, the whole ended up less than the sum of its parts. I just didn't care about any of it, it never connected to me. I spent so much time trying to figure out why that was the case—and I got nowhere. I'm going to have to try in a couple of years again, see if it was just bad timing or something.

This is one of those books that everyone loves—and as far as I can tell, there's plenty of reason to love it. Sadly, I didn't. If you haven't read this yet, you probably should—I just hope it works out better for you.