I've mentioned before here that I think that Dave Barry is just about the funniest writer around—I used to gobble up his stuff in the newspaper and bookstore as quickly as it came out. I'm not sure what changed, but there are a handful of books by him that I haven't gotten to yet. Thankfully, my Library had a few of them available to listen to last month. Here are a few thoughts about each of them. Quick reminder: the point of these quick takes post to catch up on my "To Write About" stack—emphasizing pithiness, not thoroughness.
--- 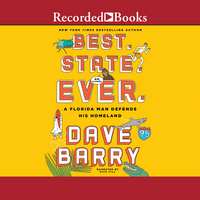 Best. State. Ever.: A Florida Man Defends His Homeland

The best parts of this one for me were the introduction (explaining some of the phenomena behind the widespread mockery of Florida) and the chapter giving a history of the state. I chuckled a lot at both of those.

When he moved onto looking at various tourist attractions and or locations in the state, it lost a little bit for me. There was something in each chapter to make me grin—maybe even laugh. But not as much as I'm used to from Barry. The Key West chapter came close, but even that stumbled. I do think if I'd ever been in the state to get a feel for some of these places it might have been better.

The biggest revelation for me from this is just how funny Dick Hill can be. No offense intended, but the voice of Jack Reacher and other thrillers is just not what you think of when it comes to silliness. But man, he was really, really good at this. 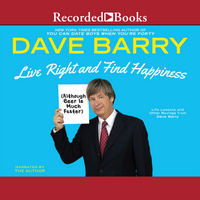 Live Right and Find Happiness (Although Beer is Much Faster): Life Lessons and Other Ravings from Dave Barry

This is more like it: pieces of wisdom (and other things) Barry's passing on to his daughter and grandson. The driving tips for his daughter were fantastic (not just because my daughter is in the process of getting her license right now). The letter to his infant grandson was funny and touching.

Barry also looks at his parents' generation (the Mad Men generation) and their ability to party, Google Glass, and a trip to Brazil for the World Cup (not being a sports guy, I didn't think that last one would do much for me, but it was really funny). Oh, yeah, then he talks in-depth about a trip that he and Ridley Pearson took to Russia to talk about writing.

As much as I liked Dick Hill, Barry's a better narrator of his own stuff. 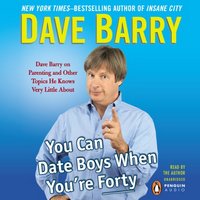 You Can Date Boys When You're Forty: Dave Barry on Parenting and Other Topics He Knows Very Little About

This one ticked all the right boxes for me—the stuff about his daughter dating was the kind of thing that fathers everywhere can relate to and second; taking his daughter to a Bieber concert was even better. It was probably not a good idea for me to listen to his chapter about Fifty Shades of Grey at work, thankfully no one asked me why I was laughing (I did not want to have to explain that). Oh, and his funeral instructions were priceless.

Something I wasn't prepared for was a long piece about a trip his family took to Israel. Listening to Barry juggle travel humor (searching for A/C and Wi-Fi in the midst of historic/cultural wonders), sensitive political discussions, and even getting close to the spiritual was fantastic. It's not the kind of writing that you often see from Barry, and it's easy to forget he can be really effective doing things that aren't just verbal slapstick.

This is probably one of my favorite collections from someone I've been reading for decades. This is just great.