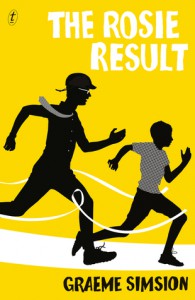 So I loved The Rosie Project Simsion's tale of a geneticist who is probably on the Autism spectrum, but has never been diagnosed, setting out to find a romantic partner in the most scientific way he can. It was charming, funny, and hit all the right emotional notes. If you haven't read it, go do so now. The sequel, The Rosie Effect, about the early days of Don and Rosie's marriage had a lot of the same traits but fell short on the story and heart. Which gave me a lot of pause when I saw a third volume was coming out a few months ago. But curiosity got the better of me, and I picked up a copy from the Library.

Phew! Simsion's remembered what made Project so successful. It's not quite as good, but it's close enough for me.

Don and Rosie move back to Australia after a decade-plus in NYC. He's returned to his university, Rosie's got a major research position. They didn't consult their son about the move, that's causing all the problems associated with someone on the verge of adolescence being moved thousands of miles away from everything he's ever known. To complicate things, Hudson's a lot more like his dad than even Don realized. Incredibly intelligent, opinionated, precise, overly literal, socially awkward and stubborn. Throw a kid like that into a new school, new country, with no friends or teachers who know him—especially when he's unhappy—and you have a recipe for disaster.

Which is precisely what Don and Rosie have on their hands. Hudson's school is on the verge of expelling him but is willing to make allowances for someone diagnosed with Autism—while taking them out of the mainstream classes and educational path. Neither of his parents are all that interested in that course and begin working with Hudson on ways to fit in.

To add to that, Don's fallen victim to the outrage culture of contemporary universities by answering a question about skin tone straight-forward and matter-of-factly with no thought of political/social connotations of his words. It was, of course, caught on video and has put his entire career in jeopardy. Rosie is dealing with a boss who seems to favor another member of the team she's nominally leading and blatant misogyny from the boss and that team-member.

Don decides to take a leave of absence from his job (handing a victory to those wanting his head, but protecting his job so he can return after the dust settles) and sets out to help Hudson in a strategic fashion like he had done for himself on various fronts. With help from family and friends, he sets out to help Hudson gain some friends, become able to participate in group sports, dress like a normal kid, and essentially fit in.

There are lots of ups and downs along the way—Hudson does grow, but not in all the ways Don wants or expects. Don does, too—even making a friend who's into homeopathy and against vaccines (even if he's committed to showing her the error of her ways).

I do wish Rosie had been a bigger presence in this book, that's my biggest complaint, really. Not just because her name is in the title, but she's Hudson's mom and Don's wife. She should've had more to do in the story rather than being relegated (for reasons the story allows for) to a supporting character.

The basic theme of the book is about embracing who you are and finding a balance between fitting in with society and compromising who you are—if you're on the Spectrum or not. In addition to having a lot of humor and heart, the overall tone is hopeful, oddly optimistic. It's a great, heartwarming read that will remind readers why they loved the character of Don Tillman and will provoke a lot of thought while providing a great amount of entertainment.