Take me back out to the black 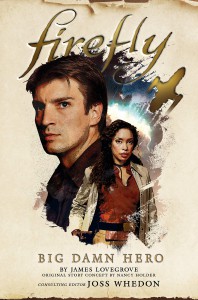 Inara gets these faraway looks -- don't know what t means, but I know not to ask. Still got the Tams on board, and Jayne hasn't tried to sell 'em out since we got those medical supplies on Osiris, so that's a plus. Shepherd's sill reading his book of fairytales. Zoë's still my first officer, and I wouldn't have any other. Kaylee keeps us running, and Wash keeps us flying.

Is it a good life or a bad one? The answer doesn't matter.

It's the only life we have.

I was a fan of Firefly from the first episode that FOX aired -- and was crushed by the cancellation. Serenity was a great send-off for the characters, but like for so many, I wanted more. However, for reasons I don't understand, I haven't read any of the comics that came out after (which bothers me). Maybe I was just trying to move on -- aside from the bi-annual (or so) rewatch of the series and movie. But when I saw that Titan Books was going to be doing a series of novels, I had to give them a shot. And then let it sit on my shelf for months.

Whoops. That was a mistake that I'm glad I rectified.

Before I talk about the novel, I've got to say that this is probably the nicest tie-in novel I own. It's just a high-quality production, from cover to printing, to ribbon bookmark.

Sometime between "Heart of Gold" and "Objects in Space," the crew finds themselves on Persephone picking up some cargo to make a run for Badger. In the chaos that ensues during a bar fight, Mal is kidnapped and Zoë and Jayne can't find a trace of him anywhere. With a clock ticking on the delivery, the crew decides they have no choice but to deliver Badger's goods, even with Mal in danger. Book stays behind to see what he can discover.

What he finds is evidence that Mal's been taken by a group of Browncoat vets still embittered by their loss to the Alliance. They've got a little track record of finding "traitors" to the cause, trying them in a kangaroo court and executing them. The ringleader of this group seems to have a particular hatred for Malcolm Reynolds and it doesn't seem that Mal's got long before he's convicted and executed.

Meanwhile, Mal's trying to make sense of what's happening to him and takes a trip down memory lane, going back to his childhood/early adolescence and reliving the days at home leading up to signing up with the army for the Independent cause. What we see is an immature Mal, with very little to tie him to the man he is -- the same mouth, certainly, and a little bit of the same style. But it's the war that turn him into the man that we all know and love.

Shepherd Book gets a nice little adventure on his own, able to use an old contact of his to extract information about what might have happened to Mal that Zoe and the rest can't get. Inara gets a moment or two to shine, as does just about everyone else. Zoë gets the spotlight thoughout (as she never quite got in the show, sadly), which was great. River's . . . River-ness(?) was on full display and was great. A lot of care was show in getting the characters -- all of them, either the crew or otherwise -- just right. And they did a great job of that.

It was a lot of fun exploring Mal's roots. I'm not sure what kind of background I'd imagine him having, but it wasn't this one. I could've bought another childhood/adolescence for Captain Tightpants, but this works just as well. Watching it come back to bite him seems fitting, really.

I wasn't crazy about the end -- the way that the crew left things with the kidnappers seemed a bit harsh. But the 'Verse they fly in is a harsh one, and sometimes you have to let things be rough. So I'm not going to complain too much, but it left a bad taste in my mouth.

Will this work for people who didn't like the show? No -- well, probably not. But why would they be picking up the book? Will it convince anyone not familiar with the show that this is a universe they want to spend more time in? Mayyyyybe. Will those people enjoy the novel? Same answer. Will this help fill the void that the premature cancellation left in the hearts of so many fans? Yes. It'll also get them asking for more -- this is a fanbase that doesn't seem to understand the concept of satiation. I know when it comes to these stories, I don't.

It's a very satisfying story, exciting, capturing the feel of the show and the characters. I loved getting to spend more time with these people and I hope Titan gives us several more books.