Welcome to Eon in this Promising YA Fantasy Introduction 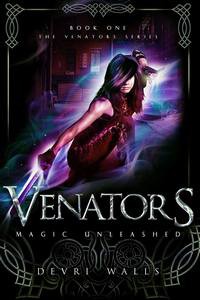 Back in 2016, I read and blogged about Venators: Through the Arch, which was later picked up by a new publisher, given a re-write, a spiffy new cover, and was re-born as Venators: Magic Unleashed. I haven't read that old post in a long time, and won't until I finish with this one, I'm only linking out of habit. I hate to say it, but I remember very little about the original version of this book beyond a vague grasp of the plot outline, some vague notions of characters and an overall positive regard. Oh, and a strong interest in volume two. This revamped version is stronger, with some of the rough edges smoothed out, and strengths sharpened. Brown Books and Walls made good use of the relaunch. But let's set aside the comparisons and focus on Magic Unleashed.

This is a portal fantasy about a world called Eon, populated by humans, elves, vampires, werewolves, elves, dragons, etc. There are connections between Earth and Eon, allowing travel between the two -- although they're not as strong as they once were. It turns out some humans from Earth have a certain invulnerability to the kinds of magic employed by the various races (like a werewolf or vampire bite, but not, say, an invulnerability to a werewolf tearing off their head). Thee humans also have other enhanced physical attributes allowing them to go toe-to-toe in combat with members of these races. Which has made these humans a powerful force for good, and a potentially tyrannical force as well. Eon's known more of the latter lately, which has led to a lack of recruitment.

But now, society's on the verge of collapse into chaos, warring tribes trying to wipe out other races in a fight for dominance, and the end of law. So some people have taken it upon themselves to reintroduce these humans, Venators, to Eon. Enter Tate, a warrior who is convinced that Venators are the key to Eon's survival -- he's been to Earth before, and now returns to bring back some people he observed then. Six years ago, he encountered a young teen named Grey Malteer -- who was forever changed by their brief encounter. Now in college, Grey is about as well-read in the lore of the supernatural and weird as is possible for someone to be while stuck on Earth and not being known as a crackpot (although he's regarded as pretty eccentric, probably well on his way to crack-pot status).

An acquaintance of his from childhood, now attending the same college, Rune Jenkins is repulsed by the same things that Grey is focused on (while also drawn to them). Rune is totally unprepared to accept that the supernatural is anything but wild fiction until she's attacked by goblins and rescued by a large blue man (the aforementioned Tate). Which really can only make her a believer -- or drive her to some sort of psychotic break. Thankfully, she goes with the former. Tate brings Rune and Grey into Eon and sets before them the calling of Venator.

To oversimplify things: from here out, the two are introduced to this world, the beings that populate it, the political realities that govern it (and see them only as pawns), and they begin to embrace their new identities, while engaging in a brief battle or two. While Rune and Grey are introduced to all this, so is the reader -- and it's clearly the point of this book -- to bring the reader and these two into Eon, give us all a taste of what's to come and help us get to know the players. There is a clear plotline and definite story here -- don't get me wrong -- but the major function is to provide a foundation for things to come.

The book would have to be a lot longer to serve as anything other than an introduction -- the ruling council alone is made up of enough characters we'd need a few more chapters to really get to know them and their goals -- although they can be summed up in lust for power and influence for themselves and their race to the possible detriment of every other council member/race. Then you throw in Tate; his allies (however temporary) the vampire Veridia and the shapeshifter Beltran; the two humans; and the council's enemy, Zio -- and really, you've got enough players that you really can only skim the surface with in 354 pages.

We get to know Grey and Rune enough to see they're well-developed and three-dimensional, and many of the rest show signs of being that developed, but we don't get to see that fully displayed -- but we see enough to know that given the opportunity, the characters will be easily fleshed out. One thing I noted in particular while reading this is just how many seeds Walls planted in the characters and situations to come back to in future installments. This foundation is built in such a way that several books can be built on it -- it's really impressive to note.

Yes, this is written for the YA market, so there's a bit more action than others might use. There's a focus on certain kinds of emotional beats, and that sort of thing. But it's more of an accent to the storytelling than other writers would've made it. For some reason, Mercedes Lackey's Hunter series and Brandon Mull's Beyonders Trilogy come to mind as I think about similar series -- but the YA-ness of both of those comes through more strongly than it does with this book.

Book Two, Venators: Promises Forged releases today, and I'm hoping to start it in a day or two -- I'm looking forward to seeing how Walls takes all these ideas, characters, and potential and develops them. This is a good starting point, and what comes next can't help but be better when she can focus more on exploring the world she's created and shown us rather than just establishing it here. This is a good book and I do encourage people to read it, but its foundational nature should be borne in mind.