Beautiful, moving, and brutal. You haven't read anything like this fantasy. 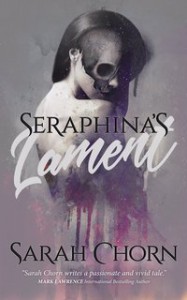 The author also took part in a Q&A with me over on my main blog that is one of the best I've taken part in (my part was so-so, her's was great!)

This takes place in some sort of Fantasy World, one rich in magic -- elemental magic. There are those with Fire Magic, Earth Magic, Animal magic -- and so on It's hard to tell just ow the various people use their magic -- but you get an idea that the world was full of a lot of magic that just isn't working any more. The planet seems to be dying and one of the first signs was that fewer people were showing signs of magic and those who had it couldn't use it has they could before. That right there is a great hook for a fantasy story -- but for this book, it feels like it might be the seventh or eighth most important thing to know.

There's a little bit of chicken and egg to this situation -- did the economic and political upheaval happen because of the dying magic, or is they dying magic a response to the upheaval? I don't think the book answers the question and I think I could argue for both positions (I've only read the book once, and I might be forgetting the one or two lines that definitively answer this question). The dynasty that had ruled The Sunset Lands was toppled by revolutionary forces -- collectivist rebels seeking to remake not just the government, but society as a whole. After the Revolution, the Premier ends up pushing the citizens into collective farms and mines to provide for the nation as a whole. This is met with resistance, counter-revolutionary movements and problems. As the world dies, as the magic that aided people in both industries fades, the situation gets worse and people are pushed to desperate actions -- and things that are even beyond desperation -- just to survive.

In the midst of all this we focus on a few people -- one farmer who lost everything, his home, his family, his hope. Seraphina, the title character, a personal prisoner of the premier, a slave that he spends years tormenting and crippling. Her twin brother, who escaped from the premier because of Seraphina's sacrifice. We also meet others who offer aid and succor to as many as they can -- food, shelter, assistance fleeing from the government's forces -- they're dubbed counter-revolutionaries, and while they might aspire to that, they basically just help people live a little longer. We also, of course, spend a lot of time with the Premier -- who can do nothing to prevent the collapse of his world and his society, but puts all his efforts into it. Lastly, we see the sleeping gods of this world awaken to watch the approaching end. I don't feel comfortable enough talking about the characters in any more detail than that -- they will grab your heart, break your heart, inspire and frighten you.

I've seen a couple of reviews that use the phrase "grimdark" to describe this book. Maybe I'm being restrictive in the way I use the term, but I don't see the book in that model. It's a different kind of dark, if you ask me (there's a torturer that I can imagine Abercrombie's Glotka accusing of going too far). This novel feels like it's a few steps beyond dystopia, when the status quo of unjust society, environmental woes, extreme poverty are looked back on by people in a sense of "remember when we still had a chance to turn things around?" One character prepares for death and thinks back on his full and happy life. My notes focused on that "happy" with an all caps, "HOW?" Yet somehow, and I wish I could give a reason for this, somehow the book never becomes burdensome to read, you're never thinking, "I've got to trudge through how many pages before we can get to some resolution?" You don't want to see more tragedy befall the characters you know, you don't want to face another interlude where you see the horrors that other characters face, where society breaks down further, where taboos disappear like a mist. But you can't stop reading this book, you can't help but read on.

This comes down to the way that Chorn tells the story, the language she uses to talk about the heartbreak, the horror, the tragedy, the atrocities, everything. So often, she'd be talking about life being pain, and death being the release in ways that elevated the idea, that seemed new and revolutionary, yet so true, so familiar that you intuitively related to the sentiment. It's not right of me to talk about this without examples -- but I have an ARC, so I can't quote from it (and even if I had a published version, I don't know that I could've picked just one or two examples -- I'd have had a hard time limiting myself to a dozen favorites). There's a lyrical, poetic quality to the language. There's a humanity that infuses every nook and cranny of this novel in a way that I can't imagine not appealing to readers.

Before I forget, I want to talk about this cover a little bit. Is that not one of the most disturbing images you've seen lately? When Chorn's publicist approached me about reading this book, I (mostly) jokingly said something about having to read this book just to get the image out of my brain -- like you have to listen to an earworm all the way through to get it dislodged from your brain. It's a perfect cover for this book.

This isn't a perfect book -- there were times I wondered if she'd gone to far with the depravity expressed by one character or another. The repeated uses of "closure" as in a character getting or needing "closure" or "moving on," seemed out of place for this world -- the same for "survivor's guilt." And honestly I have no problem with the conventional wisdom of a world like this having a concepts similar to those, but talking about it in the psychological language of late 20th/early 21st century seems odd to me. The Yeats allusion really struck me as unsuitable. (any of these might have been addressed in the final edits and might not appear in the final copy). None of these ruined a scene or a moment for me, but they did all cause me to take a beat and ask, "really?" It's nothing significant, but they all felt inappropriate in this setting.

Time and time again while reading this book, I was struck by how unique, how unusual this experience was -- I hadn't felt like this since I read Darrell Drake's A Star-Reckoner's Lot a couple of years ago. Which doesn't say much to most readers, because it's a criminally unknown book. So I stretched my memory some more and came up with N. K. Jemisin's The Hundred Thousand Kingdoms as having a similar impact on the way I thought about the story, and how unusual it feels compared to other fantasies I've read. The experience of reading this isn't something I'll forget any time soon.

Now, this is the first book of a trilogy, and I'm left totally unprepared for the second book. The middle book of a trilogy is where things are supposed to take a turn for the worse, leaving the reader wondering where the story is going to be able to take a turn for the better. I don't see how things can get worse from this point, how there's more chaos, more destruction, more peril possible. Which means that Chorn's going to have to cast off traditional story structure, or pull a rabbit out of her hat (well, probably a few nests' worth). Maybe both. I'm eager to see how she accomplishes book two.

But to focus on this book -- this is a special fantasy. Beautiful, moving, and brutal. Read it.

Disclaimer: I received an ARC of this novel from the author, it didn't impact my opinion beyond giving me something to have an opinion about..