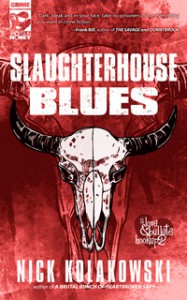 “What’d you put in there?” Don said, nodding at the soiled duffel bag in the backseat.

“About twenty pounds of tobacco, but don’t worry, no leaves, just the little bits. I asked the sweepers to give me the scraps.”

Don laughed. “A couple years back, we tried taking those scraps, making cigarettes out of them. They sold, but not enough. You can’t fight Big Tobacco.”

It didn't take long for Bill and Fiona to realize that the business relationship they found themselves in at the end of the last novella to be just as unpleasant as the one they'd just left. They hadn't jumped into the fire per se, more like they'd jumped from one frying pan into another. And their new associates took a similar approach to their older associates to their exit -- they wanted them dead. So now the pair are trying to avoid two large-scale criminal enterprises bent on revenge, while trying to secure enough of a nest-egg to retire and disappear.

That doesn't sound fun. At least not for them, for readers on the other hand...

Fiona is off doing a small -- but hopefully profitable -- job for a couple of brothers she's worked for before. They're cigar manufacturers in Nicaragua, where the competition might just be getting lethal. Bill, on the other hand, is in another country trying to hide out among the throngs of tourists. Let's just say that neither of them meet with a lot of success -- but Fiona does manage to get a lead on what should be an easy heist. The catch is, it's in New York. Right in their old backyard.

So we have an easy heist, an uneasy alliance between the couple and a less-than-trustworthy man who can lead them to a big pay, assassins on their tail and some others who discovered that the couple has delivered themselves to their city. Chaos ensues.

It's action-packed, but with a smaller body count than the previous novel. But at least one of the deaths happens in a way that will stay with you. Not in a haunting way -- but in a "wow, what a cool visual" way (something you can appreciate in fiction -- in real life, it'd be horrific and witnesses would likely need therapy).

There's an interesting tie-in here to some things that happened at the end of World War II, reminding the reader just how much moral gray area existed for US troops in those last days of the War in Europe. Well, a lot of gray existed, and some of it might have been made. Either way, it was there.

At the end of the day, I didn't enjoy Slaughterhouse Blues nearly as much as A Brutal Bunch of Heartbroken Saps, but I think it says more about the latter than the former. It's a solid piece of writing, expanding and deepening the universe of these characters a tad. It gives us another opportunity to see them in action while doing some important things for Fiona's character. If nothing else, Slaughterhouse Blues sets up the third novella (which is better than either of the other two). But most importantly, it tells a good, entertaining story on its own. If I'd read this one not knowing who Bill, Fiona or Nick Kolakowski were -- I'd have sought out more about them and by him. That's good enough for me.

<i><b>Disclaimer:</b> I received a copy of this book from the author in exchange for my honest opinion.</i>