An entertaining thriller follow-up that almost lives up to its predecessor. 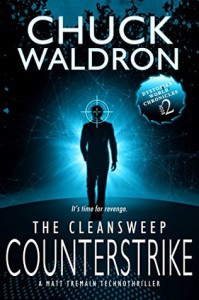 This originally appeared at The Irresponsible Reader as part of a Book Tour stop which includes a giveaway and Q&A with the author.
---

Let me preface all this by saying that I enjoyed The Cleansweep Counterstrike, I thought it was a fun return to the characters of the first book. I had some problems with it -- that weren't so bad that they kept me from enjoying this book, but they diminished my appreciation. I do talk about them below, and to adequately express them takes some space -- so much so that it dominates my post. This isn't because I didn't like the book -- it's just that I wanted to be sure I explained my thinking. So I'm stressing at the outset -- I recommend this book, I liked it and I think that other readers will, too.

Ahab had his whale, Coyote has his Road Runner and Charles Claussen has Matt Tremain (and the others that helped him out in The Cleansweep Conspiracy). Claussen lost a lot -- not just in terms of influence of money, either -- when Tremain's investigations helped bring his Cleansweep project down. Now on the run from his former bank-rollers and trying to keep under the radar of law enforcement, Claussen risks everything to get his revenge.

Tremain and his friends have moved on in their lives and careers -- but you get the impression that they haven't stopped looking over their shoulder for something to come at them for their role in Cleansweeps failure -- not just Claussen, either. He may have been the front man, but no one thinks that he's the only one that might bear a grudge.

After he gets his revenge, Claussen does plan on trying to get some mercy from his benefactors -- and maybe see if he can demonstrate that Cleansweep can work in another country. But first things first.

I am so glad that Waldron took this approach to things -- I went in apprehensive that this would be Conspiracy Redux -- somehow the people behind Claussen were trying it in a new city/country (or worse, they were trying again in Toronoto under a different name) and that Tremain and company had taken it upon themselves to head off to the new location to do the same thing they'd done at home. I just wasn't ready for the tortured logic that would make it possible. Instead, it's all about the fallout from Conspiracy -- good and bad for all involved, and all parties trying to go on with their lives, obsessions, and whatnot. Everyone except Claussen, that is. He's still stuck in the moment, making him the proverbial fly in the ointment for everyone.

Like in Conspiracy, there's some issues with time -- how much time went by before Claussen starts his efforts at revenge, how long before Tremain and Carling go hunting for Claussen, for example -- there's a couple other spoiler-y items that I'm confused on the timing about, too. Yes, Waldron gives plenty of clues about the time, but some of them are pretty vague and some of them come so late into the game that by the time he says anything about it, it's too late and the reader is already a bit muddled on details. That could just be me, but I don't think so. On the flip side, there's some things in Tremain's personal life that move so quickly (I think) that they're hard to believe. The key there is to not fight it, not insist that everything's crystal clear -- and the book will sweep you up in the hunt and you'll stop caring. And, when it comes to the things that are important -- he doesn't miss a step. It's only in the setup, the subplots, the background, etc. that things get muddled.

Once Claussen starts to move in and really gets the four worried about what he's up to and what might happen to them, the book comes together and all the little quibbles vanish. There's danger afoot, hazards everywhere and they all will have to be ready to adapt to any strange circumstance if they're going to get out of this alive and intact.

We spent plenty of time with Claussen in Conspiracy -- and we get even more here. Early on, almost every line of dialogue, every thought of his that's recorded is as diabolically evil as it could be -- which made it so hard to swallow. But after a while, that goes away. And you can almost reach the point where you want to see Claussen escape a little longer so that when he does come for Tremain, the whole thing will be a tinge more exciting.

My main problem with this novel is that we don't get nearly enough time with Tremain and his allies -- so much of that part of the story feels rushed and under-cooked. I'd like more time with Carling, Remy and Susan. Yes, Tremain is the focus -- and should be -- but we get almost nothing about the other three when they're not playing backup to Tremain. Carling is the most neglected (which I don't think will be a problem in the next book), keeping him the one I want to learn most about -- Tremain's Russian hacker benefactor would be a close second.

Angela Vaughn, Claussen's former security chief, was one of the highlights of Conspiracy for me -- and she has a great moment or two here. But sadly, just a moment or two. I'm glad that Waldron brought her back for this book, I just wish he'd done more with her.

The criminals and mercenaries that Claussen surrounds himself with and/or is surrounded with (it's a fine, but important, distinction you can learn about yourself) aren't as compelling. Those that are competent vacillate between almost too capable to believe and have they ever done anything more complicated than hold up a liquor store?

Conspiracy felt plausible, maybe some of it was a stretch, but it still struck me as something not too far-fetched, and the stakes felt real. On the whole, Counterstrike is probably closer to plausible, but the stakes didn't -- maybe because it felt so unlikely that someone like Claussen could be so focused on his revenge -- so short-sighted about the dangers inherent in pursuing it (from the government, his backers, other enemies he's made). But it's that Ahab-like focus that drives the novel, so you have to accept it. Once you do -- the rest is easy to buy into.

Once again, this novel is close to be a great thriller, but it misses by an inch or two on many fronts -- some are minor quibbles, some are more than that -- but you get enough of those and it's hard to be enthusiastic about the book as you could've been. Maybe I'm wrong, but it feels like this is a draft or two away from being at that point (would a Toronto police detective call the FBI "the Feds"?). For every thing that I grumbled about above (or put in my notes and didn't bring up because I was starting to feel like I was being negative), Waldron nails 3-4 other things. The story is there, I simply don't think that Waldron told it as effectively as he could've.

I don't want this post to come across as negative, I'm just underwhelmed. I enjoyed it -- I don't think it's as good as Conspiracy, but it's a worthwhile continuation, and should make the reader keen to get their hands on Book 3. Given where Waldron leaves things, it has the makings of a pretty strong installment.

Disclaimer: This book was provided to me by the author in exchange for my honest thoughts.