The Past and Present Collide for Rebus and Clarke 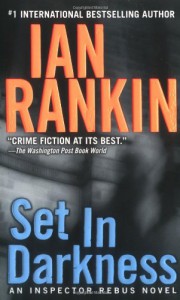 This has all the elements of a good Rebus novel -- and then some.

We've got a murder that took place so long ago that there are almost no living witnesses or suspects, a very contemporary murder, Rebus in political trouble, Rebus being self-destructive, and a couple of cases that have nothing whatsoever to do with the murders -- oh, and Big Ger Cafferty shows up to do something horrible (and something helpful).

Farmer John is near retirement and comes up with an assignment to keep Rebus out of his hair -- he's part of a task force overseeing security on the construction for the impending Parliament. This construction uncovers a murder victim and Rebus and the rest of the task force begin investigating. They can barely get started when another corpse shows up. This one is very fresh, and very connected to a prominent family -- politically and culturally. I'm not going to get into this much more than that -- there's a lot of good stuff in these cases, most of which we've seen variations of before. This doesn't make it bad, it's very Rebus-y material, told the way we've come to expect.

The part of the book that fascinated me were the crimes that had little to do with the murders. Siobhan Clarke starts off the book doing some work on a sexual assault case that isn't really hers, and then witnesses a suicide of a homeless man. This homeless man turns out to have plenty of money in the bank and a history that cannot account for that. Clarke threatens at times to take over the book with her investigations. Not just from her investigation, but the way that one uniformed officer describes her as "one of Rebus'" and the introspection, speculation and reaction to that observation causes in Clarke's life and work. (Incidentally, Clarke taking over the novel would be fine with me)

One of the storylines is perfect -- there's almost no interaction with any police characters, and resolves largely off-screen. Basically the way that most storylines actually resolve in the world. There are payoffs in the novel as a whole, but not in the way you'd expect.

Really well-constructed with almost no dull moments, puzzles that you can't suss out at first glance, and a whole lot of great characters. There's not a lot for the courts to deal with at the end of this book, but that doesn't mean that there's no justice found for any victims.This isn't the best Rebus novel I've read, but it's really, really good.