The sequel is just as good as the original (phew!) 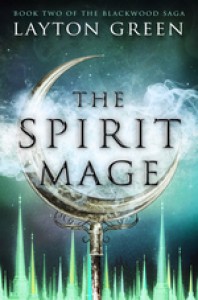 Picking up so soon after the end of The Brothers Three that it might as well just be the next chapter, The Spirit Mage continues the story of The Blackwood brothers and their companions (most of them, anyway).

There are essentially four storylines at work in these pages. There's one focusing on the villains here -- the wizards running the campaign against the rebels, the Romani, the "common born" who aren't content to stay that way -- and a spirit creature invoked to find the sword that Will's been carrying.

Speaking of Will, he and Caleb find themselves -- and Caleb's ex, Yasmina -- in the necromancer's castle. Will and Caleb are set on returning to New Victoria to try to find a way home. Meanwhile, they have to convince Yasmina that this very strange dream is real. Soon after they set out, they are captured by slavers and are headed towards mines that no one has ever escaped from.

Meanwhile, their brother Val was escorted back to Urfe where things got immediately interesting -- just in case the reader might be tempted to think that his story was going to be a repeat of The Brothers Three, Green establishes right off that such will not be the case. Anyway, the only way that Val can determine to find his brothers is to actually figure out how to use the magic he's been trying to master. So he enrolls in the Abbey -- a wizarding training college. He befriends a few wizards, gets involved in some pretty serious extra-curricular activities.

Mala disappeared during their party's assault on the castle with a majitsu -- her story is easily the least predictable, and hardest to summarize without spoiling. It's not as interesting on the whole (primarily because we're used to focusing on the brothers), but man, when it gets weird, it gets weird.

The Brothers Three was your basic Portal Fantasy -- a little different, because most of those feature much younger characters (or at least most that I've read). This book was more of your typical fantasy novel -- wizard in training, heroes on a quest that goes awry. It's that the central characters don't belong in the world. I didn't like Val as much has his brothers last time out, but I really enjoyed his story (as stupid as he frequently was). Will and Caleb I enjoyed as much as before -- maybe more. I thought Yasmina was a great addition to the series, and the way she fits into the world was a big plus.

Mala's story didn't end the way I thought it would, but really it had to end the way it did. The same could be said for Val's, actually. Will and Caleb's ended like I expected (phew! I'm one for three). Thankfully, they were all brought to satisfying points -- in one case, as satisfying as a cliffhanger can be. At this point I'm pretty sure I know how things will end up, but I have no clue how Green will pull it off. I can't wait to see, though.

It's hard to think of this as a separate book than The Brothers Three, really. By the time book 3 comes out, I'm not sure I'll be able to tell you the difference between the two (okay, that's not totally true -- but it seems like it). Which makes it a little difficult to evaluate differently than its predecessor. Basically, if you liked the first book in the series, you'll like this one. If not, well, this won't change your mind. If you haven't read The Brothers Three, you really should.

It's honestly a little frustrating to me that I can't think of much to say about this -- but it's so consistent with the last book that I'm going to sum things up in this post the same way I did with the other book: The Spirit Mageis well-written, skillfully structured, and well-paced -- there are some nice turns of phrase throughout the novel, too. Green is the real thing, giving the readers a good story, great characters, an interesting world (or pair of them), in a well-written package. After these two books, I think I can say that this is going to turn out to be one of my favorite fantasy series in a while.

Disclaimer: I was provided with this copy for an honest review by the author.