I don't have much to say about this, but I really dug it. 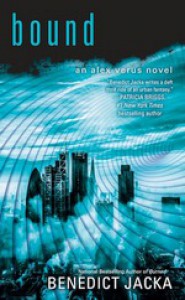 I expected this book to start with the equivalent of Voldemort bending Wormtail to his will while Nagini snacks on a Muggle. I couldn't have been more wrong -- Richard (lamest name ever for an arch-enemy, which is why it's so good) simply lays out his plan and tells Alex and Anne what they are supposed to do. No threats, no maniacal laughter, no giant snakes eating anyone.

"I don't know. Something worse."

Basically, Alex has to act as the personal aide to Morden (the first Dark Mage on the Council) when he's not being the most ignored Keeper in history. He's been working on earning the position of full Keeper -- now he's given it, and is resented by the rest. Even when things go well for him, it's a disaster. Similarly, Anne is the least utilized person in the Healer corps.

Right now I'm fighting Levistus and Richard, and I’m losing. Part of it’s because they've got better cards than me, but that’s not all of it. It's that they've got a plan. They‘re always playing the long game, looking to next month, next year. Meanwhile I just wait around until some sort of crisis happens, then I scramble to fix it. It’s like they‘re shooting holes in a boat, and I’m running up and down trying to plug the leaks. Sooner or later there’ll be too many holes, or one of the bullets will hit me, and that’ll be it.

Which is a pretty good summary of how things are going for Alex. He goes to great lengths -- some might even say extraordinary -- to be proactive. I won't say how well it works, but if you've read any of these books before, you'll have a pretty good idea.

This book probably has the best use of Luna we've seen -- I really liked everything Jacka did with her here.

We've had Richard looming as a threat since the beginning. Richard in the shadows, a danger that few believed was real. But Alex knew all along he would be back. And now that he is, he's great. There's no destroy the world plans, just evil planning and machinations and a calm exterior. You will do what I say, or I will end you -- and I couldn't really care either way. He's worse than we ever could've expected. Love it.

Ultimately, this is pretty much what every Alex Verus book is -- Alex struggling to earn and/or gain the trust of the Establishment -- particularly those he likes and respects, and any gains he may make towards those ends are jeopardized by his efforts to help others.

Now that I look back on the whole thing, I can see the clues I missed, but that’s how it works with hindsight. When you know what’s relevant and what you can ignore, then everything is obvious, but it’s not so obvious when you’re caught up in surviving from day to day. At least until life reaches out and smacks you over the head.

(not just a commentary on Alex's methods and life, but on everyone's).

It was nowhere near as dramatic as the ending to Burned, but poor Alex is actually in a far worse state now than he was at the beginning of the book, which was no mean feat -- but I should've known that Jacka wasn't finished beating up his creation. I really don't know what else to say without indulging in spoilers -- so I'll leave it at this. Bound is another great installment in this series, one of the best and most reliable around.