Rebus takes on a cold case 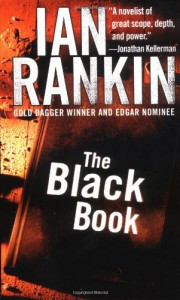 As interesting and well-written as the mystery in this novel was, as I think about the book, I have a hard time thinking about it -- the non-case material dominates the book, and seems more important for the series as a whole. Which is kind of a shame -- there's a lot to be mined in this case, and we didn't get enough of it. A famous -- and infamous -- local hotel burns down, and one body is recovered. This man didn't die in the fire, but was shot dead before it started. There were so few clues left that the case had been long considered unsolved and unsolvable. Five years later, John Rebus starts reviewing the files and talking to people involved (getting himself in hot water for it). I really wanted more of it -- and the people Rebus talked to about this case.

So what made this book interesting? Well, Rebus got into this case because Brian Holmes was attacked off duty one night. It's suggested that this is because of some extra-curricular investigations he'd been running. The only thing that Rebus has to follow-up that claim is Holmes' black notebook, full of his personal code. Rebus can almost crack one set of notes which points him at the hotel fire and the killing involved. While Holmes' recuperates, Rebus takes it upon himself to finish the DS' work.

We meet DC Siobahn Clarke here -- Rebus' other junior detective. She's driven, she's tough, she's English, educated and careful. Most of what Rebus isn't. She's got a good sense of humor and duty -- both of which make her one of my favorite characters in this series almost immediately (second only to Rebus).

The big thing is our meeting Morris Gerald "Big Ger" Cafferty – we'd brushed up against him in <b>Tooth &amp; Nail</b>. Big Ger is possibly the biggest, baddest criminal in Edinburgh, and it seems that Rebus will go toe to toe with him a few times. He's both a source of information (for Rebus, anyway) as well as a target for the police (including Rebus, in a couple of directions in just this book) -- for both the cold case and current operations. He's dangerous, and yet not at all -- I think spending time with him in the future will be a hoot.

Lastly, Rebus' brother is out on parole, having served a decent amount of time behind bars. More than that, he's crashing with his brother. Family awkwardness (to put it mildly) ensues. I'm not sure he's someone I want to spend more time with, but something tells me that Rankin has good plans for the character. Meanwhile, Clarke and Cafferty are characters I want more of right now.

A solid mystery novel -- with a conclusion I didn't see coming (to at least one of the mysteries_ -- with a lot of great stuff going on at the same time. This one's a keeper.