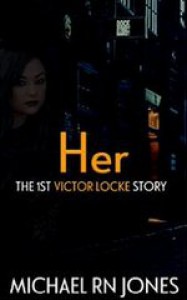 So a couple of weeks ago, The Accidental Detective was released -- and it looked good, and is sitting on my Kindle, begging for my attention.

Today, I had an extra minute or two on my hands and Fahrenheit Press was nice enough to provide this, the first story about Victor Locke and his psychologist for free. (hopefully you see this in time to head to amazon and grab it).

Locke is a fast-talking, genius of some sort who's served time for computer hacking. Dr. Jonathan Doyle was his court-appointed psychologist upon his release. Locke's no longer a client, but Doyle still sees him around. So when a couple of FBI agents drop in to his office to get his help finding Locke, it's easy for him to connect them to Locke.

They have a task -- go find a digital file that will bring great embarrassment to the British government, as well as the U.S.'. They provide no details about the file beyond what's essential to find it. They also provide the Locke with a snazzy laptop (as he's not permitted to have one any more). Seemingly on a lark, Locke takes their offer and begins searching.

The search obviously, leads to HER. The story isn't that important in this case, it's all about meeting the world, meeting Locke and Doyle. As such -- it's a hoot. There's a strong voice that practically demands to be read quickly, breathlessly, like the fast-talking Locke (can you read breathlessly?). There's a manic energy matching Locke's logic and smarts, which explains why Doyle seems so intrigued by him.

As an advertisement for The Accidental Detective/encouragement to read it? This works really well -- I'm in, and will work on getting to it soon. As a story in and of itself? Eh, maybe it works too hard at paying tribute to/updating a classic mystery story to really work. But man, it was fun. A great way to spend a half-hour or so.