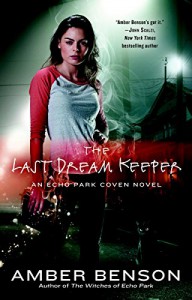 Picking up right from where The Witches of Echo Park left off, Benson takes her coven deeper into the conflict with the mysterious forces threatening the Witches Council. The opening chapters of this book had me hooked soundly and almost immediately brought me right back to where I was when the first book ended. You want Lyse and the rest to really gel, to become the family they could be (and might have been before Eleanora's death). Sure, you want them to get to the bottom of things, thwart evil and all that -- but mostly you want to see them form a strong unit, maybe have a taste of happiness. But circumstances won't let that happen. Somewhere around the midway point (I think maybe a little beofre) the book takes a huge turn -- the coven splits up. Some on personal missions, others off on an effort to enlist others to their cause, and some to keep things going at home. This was a risky move -- these books are at their strongest when you have these women interacting with each other, drawing on each other's strengths, augmenting their own weaknesses. So to eliminate this possibility takes real guts -- I'm not sure I liked the move, but what Benson does with that kicks everything into a different gear -- more action-packed and explosive. The magic that so defined the series up to this point is still there, it's just used pretty differently. And when I say that the plot takes this book in dramatically different directions than you expect, it is almost impossible to believe that the closing pages of this book and the closing pages of The Witches of Echo Park belong to the same series -- much less are separated by only one novel. Somehow, however, Benson pulls it off -- I really have no idea how. When I think about it, it doesn't make any sense -- but in the moment, it absolutely worked. I couldn't turn the pages fast enough, and when it was done I started looking forward to whatever craziness Benson's got in store for us.
Source: http://irresponsiblereader.com/2016/11/29/the-last-dream-keeper-by-amber-benson