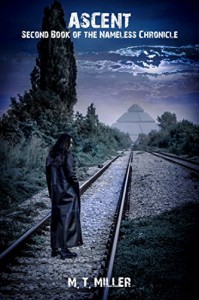 Can you read this without having read Risen? Yeah, but it'd be better if you didn't (and Risen is short enough that you might was well). I'm not sure how much time has passed since the last page of the first book, but we find Nameless pretty much how we left him -- wandering along, on the verge of . . . whatever exactly would happen to him if he didn't get more energy. Like before, almost as soon as he gets to town, he falls victim to a gang of sorts and is mugged. Of course, his first order of business (after recuperating from the beating) is revenge, which will give him the energy he needs to move around the Pyramid to search for the explanations he needs to understand his abilities, his nature and identity.

What's the Pyramid, you ask? It's a city in a giant 4-tiered structure (each tier housing a different caste). Nameless adopts a name, makes a little money on the lowest level -- full of crime, poverty and menial labor -- and buys himself access to the next level. Where he finds a new -- and legal -- way to use his fighting abilities to make money. Things go haywire from there.

There's a lot more going on in this book than there was in its predecessor, Risen -- if for no other reason than it's almost 3 times as long. It's still the same kind of book -- full of violence, some pretty good fight scenes, and a post-apocalyptic culture that's foreign, yet all-too familiar. There are many more characters, relating to Nameless in a variety of ways --- friendship, camaraderie, betrayal, exploitation, to name a few.

The way things went in Book One, I assumed that we were going to learn Nameless' origins, etc. over the course of a handful of books. Nope -- we get almost every question we had about where he came from answered -- and almost all of them are just dumped on us. There was no slow and steady learning here, just *BAM!* here are your answers. And it worked -- much better than a slow reveal, a giant dropping of information (which I usually am opposed to) took care of everything (while still leaving me with almost as many questions as Nameless had).

I shouldn't neglect to say that just because Nameless has almost all of his questions answered here, that he knows what to do with this information. I'm guessing part (or all of that) will be revealed in Book Three.

I don't normally do this, but I while writing this I went back to my post about Risen and chuckled because what I said there as a lot like the next point on my outline: "My one complaint is length -- just about everything is too short. The story is too short, most of the scenes are, too. But I'm pretty sure that's just my wanting more for myself -- to give us longer scenes would ruin the pacing, would mess with the way Miller's constructing the series. And really, when you get down to it "I wanted more!" is more of a compliment than a complaint -- but I'm calling it one nonetheless." His scenes aren't too short this time, but everything else I said there is still true. A lot of the action (especially the violence) is given to us in summary form -- we see the "important" fights, the ones that shape the story, but the rest is given in something like a re-cap mode (ditto with the flirting, with his conversations with others, and so on). So clearly, this is the kind of thing that's 1. Miller's style and/or 2. The style of this series. Either are perfectly acceptable. And honestly? If he'd given us more of the fights, more about Nameless' days in the new society he'd encountered, etc. I'd likely be complaining that he's reveling in the violence, bogging down the story with the details. So what do I know?

Ascent is a book that kept you guessing and leaves you in a very different world than you thought you were in at the beginning -- with a status quo that is so far from what it initially was that it'll leave you reeling. Taut, well-paced, with some pretty good hand-to-hand combat scenes -- and it won't let you go until the very end. Miller's really got something going here.

Disclaimer -- I received a copy of this book from the author in exchange for my honest opinion. I appreciate that, Mr. Miller -- and thanks for being so cool about me forgetting the date.