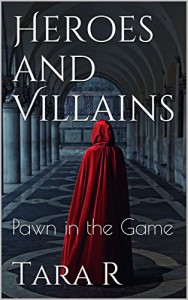 I'm not really sure where to start with this, to tell you the truth. Tara R has put a lot of effort into this, there's clearly an ambitious story she's wanting to tell. Sadly, she's not the kind of writer (yet?) who can pull it off.

She has a hard enough time pulling off basic grammar, punctuation and vocabulary, much less a consistent voice and created culture. I'd given up on this thing by the end of chapter three, but was willing (and eager) for her to win me back -- it's been done before. It's been done in the last week, but this novel just isn't capable of it.

I'd try to describe the book a little, but I'm not sure I can -- it's a dystopian fantasy, a world full of despots using their subjects as cannon fodder. There's magic, to a degree, there's widespread suffering and abuse, there's an idealistic revolutionary or two -- but no golden age to hearken back to. Just an idea (with no observable origin) that the world could be better. But there's no one on this world that's ever seen a better world, so why they'd think there is one is beyond me.

That said, various people -- royalty and commoners both, have senses of humor, moments of joy and joking, and even non-royals get dressed in tuxedos (because what epic fantasy doesn't have guys in tuxes?). In fact, for a dytopian world, it frequently doesn't seem that bad -- except for the people talking about how horrible it is all the time. Again, there's no basis for them to think so given that this is the way the world has always worked.

The various governmental entities, secret societies, and would-be insurrections just don't make sense. Their operation isn't coherent (nor do they fit the setting), their goals are confusing -- and then you get the totally out of the blue and bizarre lecture on DNA and I just gave up. This is a barely educated society, and sure, our protagonist is founding secret schools all over the place, but it's a mighty big leap to go from an agrarian-based culture in a near-constant state of war with only underground schools to people casually discussing genetic manipulation.

Could I have tried harder to understand everything? Maybe -- but I was really searching for something to hold on to, I tried pretty hard. But other than curiosity, there was no reason to -- there's not a single character interesting enough to keep you going, to make you care whether they live, die, or are never mentioned again in any way by the author.

It is simply, and perhaps too bluntly, a disappointing mess.

I'm giving it two stars because I didn't actively hate it. Also, I do think that there's something buried deep down here that's worth looking at, and I really do think that in Tara R's mind, this all makes sense -- she's clearly put the time and thought into it. But she just did not get that to the page. If you're willing to put in the work, you might find the nuggets. But I wouldn't recommend spending your time on it, it's just not worth it.

<i><b>Disclaimer:</b> I was provided with a copy of this by the author in exchange for an honest review, she hopefully doesn't regret that exchange too much.