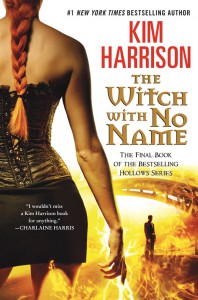 Back in 2006, I was just discovering this genre called "Urban Fantasy" that had wizards, vampires, lycanthropes running around contemporary (if not slightly future) cities, and grabbed Dead Witch Walking for what would end up being the 2nd UF series I got into. Over the years and the 12 ensuing novels (plus graphic novels, short stories, etc.) -- as I've mentioned before -- I've walked away once, and thought about walking away a few times before and after that, but now we're here once more, with feeling (all of them, for some readers) to say goodbye and see just what happens with our old friends. At this point I can say that I'm glad I stuck with it -- when she wants to Harrison can write some pretty tight scenes with a hero you want to root for, even as she self-sabotages her way through her latest escapade. And I'll read Jenks anytime. But man...it was time to say good-bye.

While building on the events of the last few novels, Harrison almost seemed to be walking back some of what Rachel had accomplished. Yes, X happened, but here's a loophole, so that it doesn't matter, the bad guys can get at our friends this way. Ivy's endangered by the master vamps, Ellasbeth is making another play for Trent/the girls, Jenks' church is in trouble, and magic as we know it may be ending. Oh, and it's all Rachel's fault (at least it seems that way to those looking in). Rachel at once refuses to roll over and let all the bad things happen, yet she's convinced that most of them are inevitable and it's probably for the best if she's out of the lives of those she cares about. The plan she concocts to save the day is outlandish (even by her standards), and how things end up after her plan is shown to be as useless as wet tissue paper.

I really was surprised with a lot of the choices that Harrison made at the end -- this is definitively the end of the series, and nothing will be the same in this world after the events of this novel -- it's as big as The Turn. Yet she didn't burn down the world or go for a melodramatic slaughter of the main characters. In fact, there was a real "Everybody lives, Rose" quality to this novel (not entirely accurate, but it was the general vibe). I think that cheapened it -- even though everyone on my short list of "They'd better make it" did end up safe, it felt unsatisfying.Harrison has been preparing us for the death of one character for quite some time, and somehow even they make it -- and it turns out there's a ridiculously easy way to get around what we've been prepared for. That bothered me quite a bit -- why spend several novels preparing us for the inevitable only to decide at the end that it's pretty evitable after all.

I enjoyed the final chapter, a happy ending coda of sorts, although I'm not sure it was that necessary. I think we could've been left without it, just knowing and trusting that things would be different in the future, but that those who survived would make their way. Set in the future, we got a glimpse of what's going on with our principals before bidding them adieu, like (but not like) what Rowling did with that wizard series, but a little more involved.

It was good enough, I guess to justify the time -- I enjoyed bits of it, and have to admire the way that Harrison shook up everything at the end. But on the whole, this left me cold and wanting more. Still, glad I persevered through the series and got to spend a little more time with these people.