An exciting hunt for cop killers that'll warm the cockles of your heart. 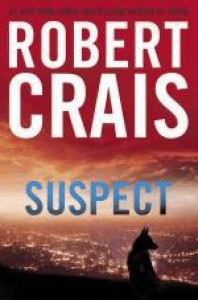 This isn't steel and nylon. It's nerve. You clip one end to you, you clip the other to this animal, it ain't for dragging him down the street. You feel him through this nerve, and he feels you, and what flows through here flows both ways -- anxiety, fear, discipline, approval -- right through this nerve without you and your dog ever even having to look at each other, without you ever having to say a word. He can feel it, and you can feel it. too.

Thus spake Dominick Leland, LAPD K-9 corps' sergeant and alpha. It's that kind of devotion to the animals that characterizes this book.  These people take their dogs seriously (well, it takes Scott a little bit, but that's the point), almost too seriously.*
Someone on the Facebook Robert Crais FanClub mentioned re-reading this to prepare for the release next week of Crais' The Promise which will feature (who knows how much) the two stars of this novel.  Seemed like such a good idea, I pounced on it, too.  So glad I did, I remember really liking this book, but I didn't remember how much I really, really, really liked this book.
This is the story of two partners grieving the loss of their most recent partners, and recovering from wounds both physical and psychological while trying to move past the trauma by gearing up for a new assignment for the future.  One of the pair is a once-SWAT-bound LAPD officer, and the other is a former explosive sniffing German Shepherd with the Marines in Afghanistan. Which adds a bit of novelty to the situation.
That Prologue is one of the most effective opening chapters I can think of -- it's like the first ten minutes or so of Pixar's Up -- warmth, purpose, courage, heartbreak -- there's almost nothing more you could ask of it.
I love the way Crais describes Maggie's sniffing/scenting for work. For that matter, Maggie's perspective in general is great -- not goofy or cartoonish, played for laughs or anything like that. Sure, some of it is projection, some of it is just guesswork, some of it is poetic license -- but it's all good, authentic, writing.
I guess the same could be said for what Officer Scott James goes through -- I don't know what PTSD is like, really.  I just know about it from various literary/dramatic sources.  But this sure seems to work -- the guilt, the fear, the stress, the nightmares, the obsession, it rings as true. Granted, Maggie's got a greater emotional pull (who doesn't love a good dog?), and is a little less familiar than Scott -- but at least we can relate to his suffering and him.
As with almost everything Crais writes, this takes place in the world inhabited by Elvis Cole, Joe Pike and the rest.  We see that by a brief interaction between one of the detectives and John Chen (who as also mentioned by name earlier).  Brief interactions with Chen are probably the best for all involved, and here he was John Chen at his John Chen-iest -- I just love it.  Although thanks to Gotham, I'm getting an Edward Nigma-vibe off of him, thankfully, I know better. (right?)
From the start, this gets you right in the emotions, and Crais keeps you there. You're drawn to Maggie, and because of her, Scott.  You get invested more easily than with other new characters because of Maggie With about 40 pages to go, even though I knew how it ended, I still was tense.  That's good writing. Period. End of discussion.  And for the record, my eyes totally did not get misty at the end, I don't know why you'd ask.
When I blogged about this back in 2013, I said "I don't think this is the best Crais novel . . .but, given the way this worms into your heart, it's probably my favorite."  It's still probably not his best, but it's better than I thought it was initially (I was more concerned with plot and character than craft, I think) -- probably in the top 5, and it is my favorite so far.

* Yeah, totally kidding.  Not possible to be too serious about your dog.
Source: http://irresponsiblereader.com/2015/11/06/reread-project-suspect-by-robert-crais