If you'd asked me, I would've said I've written and posted this already.  Apparently not.  Whoops! So, I'll take a quick break from packing up all my white clothes and get this up now.  Better late than never, I guess. . . .

At the end of August, the best bookstore in Boise, Rediscovered Books, brought two authors to town for Readings/Signings.  Back in college, I went to readings fairly frequently*, but since then I could count the number on one hand.

Shame on me.  I need to do better at this.  A good reading is one of the best forms of entertainment around.  A less-good reading is pretty bad, but hey, at least you're supporting the arts.

Anyway, the first author was John Scalzi.  Perhaps you've heard of him -- SF author extraordinaire, blogger, tweeter, etc., etc.  Back on August 20, Rediscovered Books brought him to the auditorium of the Boise Public Library! (yes, the exclamation point is necessary).  I wondered if that wasn't overkill for SF in Boise.  Not surprisingly, I was wrong and the people that do this stuff for a living were right.  If they'd brought him to the bookstore, there's no way we all could've fit, the audience packed the auditorium.

After a little chit-chat, he read a little from his upcoming novella The Dispatcher, his first foray into Urban Fantasy.  He asked not to provide any details, as the only people getting this preview were those who came to this book tour.  He did give us permission to -- maybe even encouraged -- gloat about hearing it.  So, he we go neener neener my wife and I got to hear the first chapter of The Dispatcher and most of you didn't.  It was pretty good, and I'll be grabbing it as soon as I can.

He then read a couple of short humor pieces he wrote for AOL.com back in the 90's that were appropriate for the Back to School season, and a pretty popular (and funny) blog post, Standard Responses to Online Stupidity.  He then he spent 20 minutes or so doing Q&A -- he was polite and friendly to the people asking questions, turned even awkward questions into something interesting in his answers (he's been doing this for awhile).

What didn't he read?  Anything from the book that the tour was promoting -- The End of All Things -- which I found odd, but I was okay with because I'm way behind on that series.  Very entertaining evening -- the dude's a pro.

During the signing, he was again friendly and pleasant and didn't seem to mind people fanboying/fangirling all over him (which didn't happen too much or without restraint on the part of the fans).  When it was my turn, he laughed at my attempt at humor (which I'm going to believe was because I was moderately funny and not just because he's sooper polite), gave me a nice, personalized autograph in my copy of The Android's Dream that went with my joke.

And here's photographic proof that I met John Scalzi: 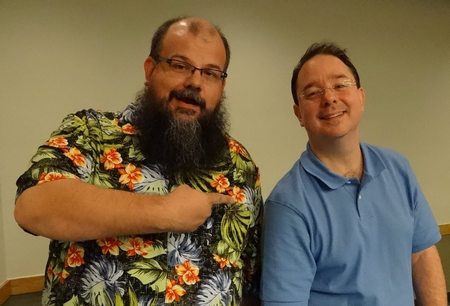 A week later, things were a bit different for Shane Kuhn, a favorite around these parts, but largely unknown.  Now, Rediscovered Books has been pushing Kuhn lately -- he's a Staff Pick, one of their book clubs read The Intern's Handbook recently, etc.  But a whopping 4 people showed up.  Which, sure, provided a nice, intimate setting -- but 4?  Oh, wait, there were 2 bookstore employees there, too.

That had to be discouraging, but he went on with the show.  After taking a poll of who'd read what of his (my wife hadn't read anything yet, 2 were in various stages of Hostile Takeover, and I'd finished it earlier in the week), he read an early section of Hostile Takeover -- the wedding -- quitting at just the right spot -- it was a good tease, you wanted to know what happened next; and I think the next part would've been very, very tricky to read aloud.  He then took some questions, it was more of a chat, really.  He had this annoying tendency to answer questions I wanted to ask in the middle of another answer, so I ended up not saying anything.  Highlights included him talking a little bit about his next book, more of a mainstream thriller; and the process of getting The Intern's Handbook to the Big Screen.  He read another bit from the beginning of The Intern's Handbook (after teasing my wife about reading the ending), where Alice and John first met.

Despite the low turnout, he didn't (that I could tell) cut corner's or half-ass his way through the reading, and was more than friendly to those of us who were there.  If he comes back, we'll do a better job strong-arming friends and family to come so that his audience will be bigger.

Here's photographic proof that I saw Shane Kuhn (better angle on me than the other).  If you go to Rediscovered's Facebook page and see the photograph I appropriated, you can see 75% of the audience for the reading) 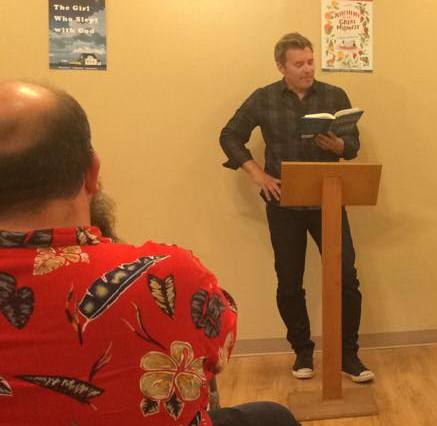 ---
* And not just for the extra credit either.  Although that probably kept me at some until the end.