So, in the last couple of months, I've read Gideon Oliver 15-17 and haven't had a chance to write them up.  Might as well tackle them in one post, right?  Some general thoughts that apply to them all, before moving into specifics. As always with this series, these books are fun, clever, and not terribly violent.  All of which are a nice balance to some of the darker things I read -- and I know I could find darker yet in this genre.  Say what you will about cozies (and I don't know if these are technically cozies, but they're at least cozie-adjacent), they're a darn sight more entertaining than the noirest of noirs.
Not just by the sly and witty narrative, Gideon Oliver books remind me of the Nero Wolfe mysteries -- he never ages, he can always find a away around the stickiest of situations and outsmart law enforcement without getting into trouble (Gideon's better at this than Wolfe, and much prefers working with than in competition with them), and while Elkins will surprise you frequently by the solutions to the mysteries, he never cheats.  Can't take this list too far, because at the end of the day Gideon isn't Wolfe and neither would find the comparison all that flattering.
Judging by his anthropological research, I'm guessing Elkins has done similar research into the way various law enforcement agencies work around the world.  Particularly with the latter two of these, I really enjoyed getting glimpses into the police methods and structures of these countries -- ditto for Unnatural Selection, but I don't think I mentioned that when I reviewed it (and am too lazy to go look).
I've said it before, and I'll say it again, reading these books are a like visiting with old friends, and I can't wait to do it again. 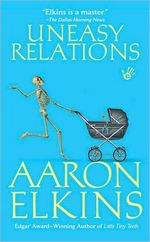 I'm glad he doesn't return to this well too often, but when Elkins decides he's going to invent a fictional (no doubt inspired by a real) major archaeological find, he does it right.  Serving as the backdrop for this puzzle, this find sounds like the kind of thing I read about in various and sundry Anthropology textbooks in college.  Throw in some satirical takes on publishing, literary agents, and academics and this becomes a really fun read.  Oh yeah, and the murder -- there's that.  That was a good puzzle, too.
I can't get into it, but the site of the major find is really the star of this one, and it's pretty cool.  The solution to the murder was a nice twist, and the Skeleton Detective was as clever as ever. 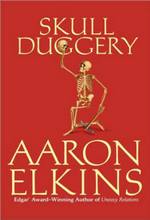 This one gets a bonus 1/2 star for the mentions by both Gideon and Julie that if he's around, a skeleton (at least a skull) will appear to keep him busy (and would probably deserve the bonus without those mentions).  I also appreciated the "just another day in the office" aspect of the attempt on Gideon's life.  At this point, he should really take out a bigger life insurance policy any time he leaves the country.
A week's vacation in a little, out of the way, Mexican village turns deadly for Gideon and Julie.  I really enjoyed the setting and the backstory on this one, even more than the forensics.
This one was almost painfully easy to figure out the killer -- although the actual motive was trickier than I thought, but after The Reveal, it totally made sense. Despite that, I thought this was one of the better ones in this series that almost never has a lesser entry. 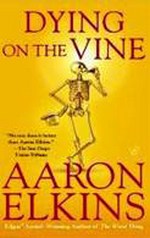 Dying on the Vine


The whole band's back together for this one -- John & Marti, Julie & Gideon in old-school Italian wine country.  The intrigue and informatin about the wine production (rephrase) reminded me of the behind the scenes look at coffee production from Twenty Blue Devils (although that subject is nearer and dearer to my heart).  While I'm not a big wine person, I know I'd rather drink a bottle (one glass at a time, I'm not a Philistine) from the hands and craft of the traditional elements of the  Cubbiddu, not the mechanical/mass produced stuff they started putting out -- which I'm guessing Elkins agrees.  Although, I can probably only afford the latter.
John navigating the local cuisine was a highlight for me, and probably speaks to my juvenile humor.
The mystery itself? Typical Elkins, smart enough to keep you guessing, compelling enough to keep you turning the pages, and not as important as the characters -- new and old -- and their interactions.
Heckuva lotta fun.