Highly Imaginative, yet left me cold 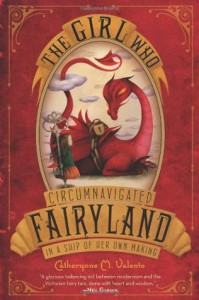 But what September chiefly noticed were their hats.
Any child knows what a witch looks like. The warts are important, yes, the hooked nose, the cruel smile. But it's the hat that cinches it: pointy and black with a wide rim. Plenty of people have warts and hooked noses and cruel smiles but are not witches at all. Hats change everything. September knew this with all her being, deep in the place where she knew her own name . . . For one day, her father had put on a hat with golden things on it and suddenly he hadn't been her father anymore, he had been a soldier, and he had left.  Hats have power. Hats can change you into someone else.

There's much more to be said about the true nature of seasons, sentient keys, the immorality of novelists, the thoughtfulness of smoking jackets,  the desires and drives of shoes....But I'm getting ahead of myself.
So last week, I found myself on the end of a batch of pretty heavy books, and needed something light and breezy -- hopefully cheery, too.  So I grabbed this off my daughter's shelf (had been meaning to get around to it since I bought it for her 3 years ago).  It didn't at all fit the bill for what I wanted, but thankfully was an enjoyable read about a girl named September and the improbable trip she takes to (and around) Fairyland.

Those were all big words, to be sure, but as it has been said, September read often, and like it best when words did not pretend to be simple, but put on their full armor and rode out with colors flying

Who couldn't love a hero like that?
While her father is off fighting in Europe during WWII, and her mother is spending her days with Rosie the Riveter (and doing her best to take care of her daughter, it should be stressed -- she hasn't been abandoned), September is convinced to join someone calling himself The Green Wind to go for a ride on his flying leopard to visit Fairyland.
Once there, she meets all sorts of incredible people, creatures, animals . . . and other things that I can't really describe. She befriends a Wyvern and sets off on adventures -- eventually being drafted by the unpopular, practical and efficient Marquess (who replaced, the wonderful and beloved Queen) into retrieving a magic object for her.   This quest sends her (literally) all around Fairyland in an effort to obtain this object and save her friends.
The sensibility here is something like taking The Phantom Tollbooth, The Last of the Really Great Whangdoodles  and throwing them into a blender with Neil Gaiman's children books. Almost. To me, and I get the sense that I'm in a distinct minority here, this comes across more as a technical exercise -- "how many strange and quirky things can I work into a narrative?"  Despite the setting, target audience and obvious authorial skill it feels joyless, there's no sense of play.  Unlike the other works I've compared it to, there's almost no fun here.
Yes, it's a children's book.  But it's not just for kids -- in fact, there's a lot here that very few children will pick up on (I'm willing to bet that I missed a trick or two).  Not as amusing as I hoped for/expected, still, a good read for children or adults who aren't afraid to read a book marketed for children.
Source: http://t.co/egicSgRij8