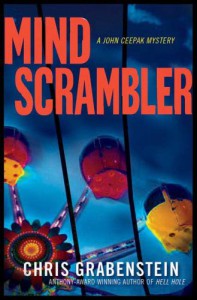 So, Ceepak and Danny find themselves in Atlantic City.  Not for fun, of course, Ceepak wouldn't go to a place like Atlantic City for vacation.  They're in town to help out a District Attorney in another state (spoiler territory for the previous book) by taking a deposition.  Sure, they pass through a casino -- where else can they stay in town?  Before they can do anything,  Danny runs into an old flame, Katie -- who we last saw recuperating from an attempted murder -- and Ceepak and Danny have stopped some slot machine players from being robbed.  Katie's dropped out of grad school and is working as a tutor/nanny for a couple of children whose parents make up a pretty popular (and family-friendly) magic act.  Something's bothering her, and she'd like to consult with Danny about something she's found later that evening.

But, naturally, before the two of them can meet, Katie's killed.  I should say, that's not a spoiler, Danny tells us this will happen on page 1 -- and roughly 35 more times before it actually happens (well, okay, maybe only six times, I wasn't counting).  The tease at the end of the first chapter about her upcoming demise would've been far more effective if the chapter hadn't started with a different one.  Or having it repeated several times in the next few chapters.  It's a minor thing, but it began to lose its effect on me, and the tease at the end of chapter 1 was the most effective, and would've been moreso if that was the only one, I think.

Thanks to Ceepak's connections, the two are allowed to assist in the investigation, and the two throw themselves into the investigation with a vengeance.  I'm pretty sure this case is resolved far faster than is usual for the duo -- Danny's driven by guilt and by grief (he'd known Katie since childhood), Ceepak's driven by whatever normally drives him, and wanting to help Danny (and probably to get home without incurring more charges to be billed to the DA).

Two things that kept me from enjoying this one as much as the others.  The setting: on the one hand, I don't think Grabenstein took full advantage of Atlantic City, but that's partially due to the pace.  But this is the second book in a row where Sea Haven hasn't played too much of a factor, and it works against the series. Then again -- good for the Sea Haven Tourism Board that the city has had a reprieve in murders.

Worse than that was how dense both Ceepak and Danny seemed to be this time -- I spent a lot more time talking back to this book, not something I normally find myself doing with these two.  The book starts with our victim wanting to talk to her old friend who's a cop about something she found.  So naturally, that's where the investigation should've started -- what did she want to talk about?  But no, Danny really only thinks about it after they stumble onto it while pursuing another line of investigation.  Our heroes also spend too much time following red herrings rather than seeing them for what they are.  I expect more from these two.

At the end of the day, not my favorite in this series.  But it was good enough to justify the time -- Grabenstein's style was as pleasant and engaging as always.  The rapport between these characters was as good as ever, and I enjoyed seeing the person responsible for what happened to Katie get what they deserved, I liked her.  Most of all though, the seed that got planted for upcoming books was tantalizing enough to keep me from spending too much time dwelling on what didn't really work here