No time for an intro this week—too much to read before Jan. 31 to bother rambling on. (mostly a joke).

Here are the odds 'n ends over the week about books and reading that caught my eye. You've probably seen some/most/all of them, but just in case:


Why Is Reading so Unpopular? How was the book? – Describing the Reading Experience—Armed with a Book trumps the 5-Star System with Data Analysis (I found this fascinating) Happy Holidays and 365 Posts in a Row—Yeah, third PaulsPicks post this week—no, he didn't pay me for clicks (but he could..., just sayin'), I think the dude deserves a tip of the cap for 365 Posts in a row. More than that, he deserves the break he's giving himself... David S’ Non-Comprehensive and Entirely Unrealistic List of Completed Series to read in 2020—If you're like me, you're coming up with reading plans for 2020, David S is at least honest enough to realize his is entirely unrealistic (unlike mine, which is going to be totally doable and not cause me any undue stress or sleepless nights in December)

Lastly, I'd like to say hi and extend a warm welcome to Mental Health •Lifestyle •Finance, Kelly Curtis, and brainyjaney (also, welcome to the weird world of book blogging) for following the blog this week. Don't be a stranger, and use that comment box, would you? 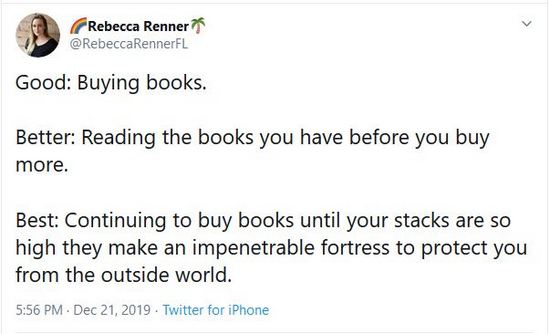