A Classic that Easily Demonstrates Its Classification As One 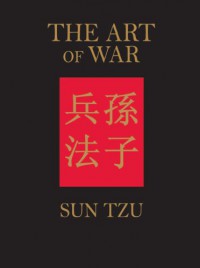 Understanding the nature of war is of viral importance to the State. War is the place where life and death meet; it is the road to destruction or survival It demands study. War has five decisive factors, which you must take into account in your planning; you must fully understand their relevance. First is a Moral Compass; second is Heaven; third is Earth; fourth is the Commander; fifth is Regulation.

So...The Art of War, the classic about military strategy that's been the inspiration for countless military leaders, business leaders, and all other sorts of people (leaders and would-be leaders alike). I tried a few times in middle/high school to read it, but never really got that far into it.

Having read it now, I wonder what my problem was back then. Also, that version I had was 2-3 times the length of this one. I can't help but wonder what extra material was in that to get me so distracted.

The quotation above contains the purpose statement of the book as well as an outline—Sun Tzu briefly works through each topic in a simple, practical manner. Sun-Tzu demonstrates wisdom in both the large scope and human psychology.

This is the kind of book that people quote all the time, it's like the movie The Godfather. You've heard/read so many lines from this book over the years, so much of it seemed almost cliché and/or obvious—but, like so many foundational texts, most of it is cliché because Sun Tzu said it first (although he did cite/draw upon sources himself, many of which we don't have, so...let's give him the credit).

Once you get past that, it's easy to see why everyone reads this, why it's still relevant, and even an idea or two about how you can apply it in your own life/job.

The footnotes are largely about translation choices and textual variants—there's almost no commentary provided, which I appreciate.

I never do this (but I should), but I want to talk about the physical edition of this thing. I'd originally planned on reading this and then passing it on to my philosophy-reading son for his collection. But as soon as I opened the box, I knew he'd have to buy his own. It's bound in a Traditional Chinese style (so the book says), abandoned in the early 1900s in favor of Western binding. In it, "single sheets of paper are printed on one side only, and each sheet is folded in half, with the printed pages on the outside. The book block is then sandwiched between two boards and sewn together through punched holes close to the cut ends of the folded sheets." Also, on the left pages are the Chinese text, with the translation on the right. Which looks great—I have no idea what any of the Chinese texts says, but it's fun to look at.

So anyway, great, historic text that lives up to its reputation. A translation that's easy to read in an eye-catching package, and an enjoyable and insightful read. It feels silly to be rating Sun Tzu, of all people, but hey—that's what's supposed to come at the end of one of these posts, so: