Laughing through the Pain of Gluten Deprivation 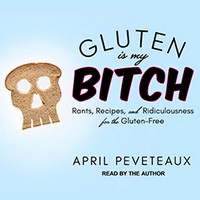 Here's the thing about going gluten-free, whether you've been given a celiac disease diagnosis or just know you feel better when you're not enjoying cinnamon rolls for breakfast, flatbread pizza for lunch, and a pile of spaghetti Bolognese for dinner: It's f******g hard. I won't sugarcoat that for you . . . Smiling through the pain of watching your friends enjoy unlimited breadsticks while your plate sits empty does not change the intensity of our shared gluten-free torment. Let's own that pain and complain about it until we're asked to leave the party. It's not all about wallowing in self-pity, though plenty of that is certainly in order. You are giving up chocolate croissants, after all.

This was a fun, fun, book that I'm glad I gave a shot to. I stumbled onto it while browsing my library's audiobook collection. I don't have Celiac disease or gluten intolerance or anything beyond a strong tendency to over-indulge, but I do have a child who was recently diagnosed with Celiac disease—and she has not enjoyed the last 10 months at all because of it. I thought I'd try the book to see if I could find any tips for her.

What I found was a laugh-out-loud (multiple times) funny book about the trials and tribulations—plus the occasional triumph—of having Celiac disease or a gluten intolerance, or in her words:

a little guidance, maybe some crazy delicious recipes, and a whole lot of poop jokes.

We haven't had the chance to use the supplement, "Recipes for the Downtrodden (AKA The Gluten Free)" but they look good. But I can say she takes care of the other two goals just fine.

Starting with talking about her own diagnosis, and some signs that others might look out for, as a way of establishing that she's coming at this from someone who needs to be gluten-free and understands the plight of her readers, Peveteaux then moves on into the life of the gluten-free eater. She covers a lot of the changes that people have to make—including ones that are not obvious—the struggles to eat at a restaurant or a friend's/relative's house, where gluten can hide (on ingredient lists as well as the kitchen), how to raise a gluten-free kid (whether or not the parent is), travel tips (largely based on her own trip to Paris, I can't imagine trying that), and a look at some of the treatments that are being worked on by medical researchers (and some loons). She closes with some thoughts on gluten-free resources/foods/sources, to help the reader out.

One of the chapters I enjoyed the most was where she discussed the overlap between the gluten-free crowd and Vegan, Crossfit and Paleo eaters (if the book was written now, she'd also include Keto, I think). She manages to poke fun at the groups as well as embrace them as allies and co-belligerents in the restrictive eating trenches. The other thing I appreciated was the encouragement to advocate to yourself without being obnoxious (or realize you're coming across as obnoxious and at least be aware of it to diminish its impact) in various spheres of life—when it comes to something as vital as the food you put in your mouth, and the ubiquity of gluten, you've got to.

Peveteaux is serious about the disease/intolerance, but not about anything else. She makes fun of herself, her inclinations and suffering—helping her readers to do the same for their struggles. The book is a great mix of advice and laughs, guidance and goofiness.

It's read by the author, and she does a great job with it (as is so often the case). She comes across as the friendly guide to the life sentence that is a gluten-free life from someone walking the same path, so she knows where the potholes are as well as where the best views can be found.

Yeah, it's a bit dated—thankfully, there are more options in the market now than there were at publication (conversely, there's a lot more hidden gluten sources, too)—and once or twice it steps over the tasteful line (and does the cha-cha down it most of the time), which makes it hard for Dad to hand to his daughter (who probably hears worse multiple times before her first class starts, but is wise enough not to tell her Old Man). But, I am going to buy a copy of this and put it in her hand. I think she'll like the approach to the subject, the voice, and tips, but most of all just knowing that she's not alone in her suffering—but seeing that you can laugh at it, too. I know I did.