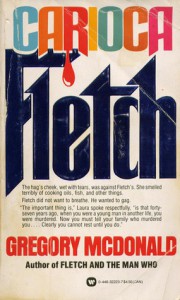 This is about the audiobook edition, I'm just too lazy to add it to BookLIkes

Just in case people were thinking I'd drunk too heavily in the Fletch/Gregory Mcdonald Kool-Aid bowl, this should alleviate any concern. I just don't like this book.

Following the events of Fletch, our now-jobless journalist is enjoying life in Brazil, he's got a girlfriend, is making some investments and friends and is about to enjoy Carnaval. Quite by accident, he runs into the newly-widowed Joan Allen Stanwyk, and things get a little awkward for a bit. But before he can follow up with her, an elderly Brazilian woman claims that he's the reincarnation of her murdered husband, come back to identify his murderer.

This distracts Fletch greatly and between that, and a new group of acquaintances who seem to be rich young men who devote all their time to wine and women, Fletch can't deal with Joan. He first has to spend some time trying to deal with the problems of their debauchery, this supernatural claim and learning about the Brazilian culture in general.

This might, might, be an okay book if it was about any other American hiding in Brazil, learning about the culture and people. But it's not a Fletch book. He doesn't solve the mystery by being clever or interviewing anyone. It's not a particularly funny book, either. It's mostly Fletch bouncing from situation to situation with little control or agency for a couple of hundred pages, and then solving a decades-old mystery by a cheap stunt.

What redeems this book is the Joan Allen Stanwyk material that bookends it. Those are the only chapters that really feel like Fletch (and, they're grounded in the rest of the series). Also, Fletch's background in, interest in, and history of investing in art is shown here in embryo—as well as the other things he does to pay for his villa, GCN stock, racehorses, and so on. So that's good, but we didn't need to see it, the character was good enough without that.

Naturally, Dan John Miller had nothing to do with any of my problems, he does a great job as usual.

This was just a misfire for Mcdonald (not the only one in the series), and is easily forgotten—and should be.