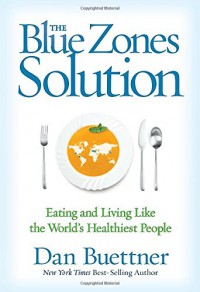 As part of some medical education I'm getting, The Blue Zones was recommended to me. I couldn't find an easily accessible copy of it, but my library did have one of the follow-ups, The Blue Zones Solution on audio. So I gave it a whirl.

There are a couple of aspects to the beginning of this book, he does a quick pass through over some of the "Blue Zones" from his first book (areas with above-normal centenarian population) to extract some common principles. This was too-much of a follow-up on what he'd already done to be a benefit to those who hadn't read the first book. He also detailed ways his foundation tried to create Blue Zones in the US following these principles for communities that requested it.

Something bothered me about the way that was carried out, but I can't articulate it without having the book in front of me to point to specific passages.

Lastly, he talks about ways you can create mini-Blue Zones in your home. Most of the advice given here is better delivered in other sources (like say, How Not to Die by Michael Greger).

Most of the support for the principles—especially as described here, is anecdotal, and the mantra "Correlation does not imply Causation" that was pounded into my head in college kept running through my mind. Maybe the original book would've convinced me—this did not. There was certainly a cornucopia of anecdotes (and a couple were hard to follow from chapter to chapter, to be honest, but that might be due to my lack of interest).

One of the principles is a commitment to/participation in religious practices. Religious activity is recommended without any regard for the truth involved. That bothers me tremendously. His later treatment of "Adventists" as a group equivalent to an ethnicity or population of a city/island/geographic area—and again, it was only the lifestyle habits, not the premises, presuppositions, and beliefs that undergird those habits that were encouraged. Selling the tree without the root isn't going to produce much fruit or shade.

I don't have any strong opinions about this as an audiobook, although I found Barrett's pronunciation of "plantain" annoying (however correct). But so much of the benefit of the book depends on looking at the PDF that came with it. That's where some of the data and all of the recipes are. So much of the useful part of the book isn't in the audio. That's not a deal killer, but as I was pretty down on the book already, it didn't help.

The book didn't do anything for me at all. I'm just not the audience for it, maybe if I'd read the first book and was curious about applying the lessons, I'd be interested. But I just didn't see the point of this one.