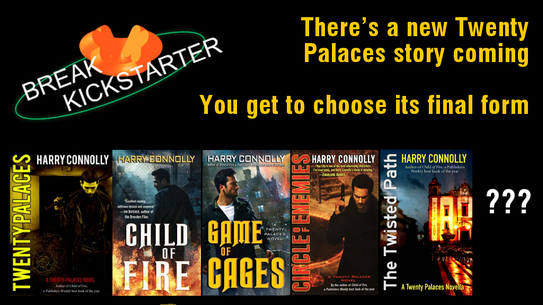 Next year will see the publication of the next story in one of my favorite Urban Fantasy series, the criminally underselling Twenty Palaces. This is music to these ears, I will read just about anything Harry Connolly puts out, and will read Twenty Palaces until he stops. Kickstarter is trying something new, and Connolly is taking advantage of it. He's running the campaign on a on a per-word rate.

So here's the deal: the minimum pro rate for short fiction is five cents/word, so for every five bucks pledged to this campaign, I'll write a hundred words. Upper limit... let's say two hundred thousand words, which would be two new Twenty Palaces novels.

Not that I expect to reach that limit--to be honest, I'm half-expecting that I won't make the basic goal.

The good news: he hit the bottom level of funding in less than an hour, and is over 600% of it right now. I've got to wait a couple of days to figure out how much I can kick in, but I'll be sponsoring over 100 words. You should, too!