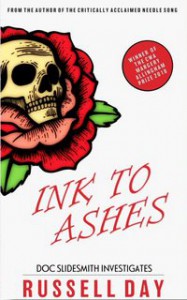 For me, the why of it is always the point.

As much as we all like a good whodunit, generally, I'm with Doc Slidesmith -- the whydunit is really what's more interesting. You might have an incredibly clever criminal -- and an equally clever sleuth (professional or amateur) -- a twisty, turny plot with perfect reveals, and the rest -- but if the motive behind the crime is non-existent or non-interesting, the novel just isn't going to be that satisfying. Russell Day's Doc Slidesmith novels are all about the why -- he'll pull the why out at the end and it'll be something you don't expect (but maybe should have), and it will be compelling as you could want.

One of Doc Slidesmiths' oldest friends has died in a motorcycle accident and his widow has very unusual request, which I'll leave for you to read about on your own. But it leads to one of the . . . strangest and most striking first chapters that I can remember.

For those that haven't met Doc before -- he's your standard-issue doctor of psychology, who has embraced voodoo and tarot reading, rides a motor cycle and owns a tattoo shop, while solving mysteries that he stumbles into à la Miss Marple. You know the type. Yakky is his taciturn friend/colleague who works in Doc's shop, and is a backup/wingman when Doc needs one (whether he wants one or not).

The widow has another request -- her husband was one of the founders of a motorcycle club, and one of the newest members has disappeared. Can Doc track him down as a favor to the dearly departed? She can't ask any members of the club so she's counting on Doc to come through for her.

At the moment, things are really tense intra-club membership. There's a move for the club to stop being a tighter association of motorcycle enthusiasts and become a full-fledged outlaw biker gang. This is causing problems in the ranks -- there are many who don't want anything to do with that, preferring to preserve the club as is -- but there are many, typically younger voices who want to go all the way with this. Tied into this move are income streams and dissension about some of them, plus pressure to add in something more illegal than they currently have to worry about.

Doc's not far into his search when he can tell there's a lot of lies around the disappearance of the member, and before Doc can figure out who's lying and why -- the search becomes deadly. It isn't long after that when Doc starts to question the official finding about the motorcycle accident. Leading to more questions and deceit. Yakky and Doc now have to walk through this minefield to find out what happened to the member (and why), what happened to Doc's friend (and why) -- oh, and maybe stop an all-out war between this nascent outlaw gang and an already established one. Just another day in the office for Slidesmith.

I was able to guess the who behind one of the lines of investigation pretty easily, but the why was something I just didn't see. The other line was a mystery for me right up until the reveal, making that particular reveal quite satisfying. Coupled with Day's ear for dialogue and evocative prose, the mysteries -- and the darkness of the human psyche they explore makes this a compelling read -- almost a must-read.

The various club members and those who come into regular contact with them are really well depicted -- and several of them are the kind of character that you hope show up again in a future book in the series. But the core of the book is Doc and Yakky. Now, Needle Song was written from Yakky's perspective, where this is written from Doc's -- and that makes so much difference. A lot of master detective types (amateur or not) need to be written about "by" a friend, associate or assistant. John Watson, Archie Goodwin, Chet, Danny Boyle do more than narrate the stories and relate the exploits of their partners/employers, they also help convey the proper sense of awe and wonder we're supposed to have for the Great Detective. In Needle Song, we got that from Yakky -- both the narration and we were given a proper sense of admiration in response to Doc. Here, we only get Doc's narration -- and he isn't nearly as impressed with himself as Yakky was/is. Which makes it harder for the reader to be.

On the other hand, Needle Song was in many ways, Yakky's story. This is absolutely Doc's story, so who else could tell it to us? And Day is able to get across the kind of guy that Doc is -- like in this testimony from his departed friend:

“Do you know what Dago used to say about you? He said, if you followed someone into a revolving door, you’d walk out in front of them. He thought a lot of you.”

Don't let the fact that I'm not raving give you the impression there's something wrong with this book. Rather, it just reminds me how impressed I was with Needle Song. I wondered if Day could live up to expectations, and I don't think he did. Many will disagree with me (which is a good thing), but while this was a solid, compelling read featuring characters that I can't get enough of -- it didn't knock my socks off. Russell Day remains one of the strongest new voices I've come across in the last couple of years. I know his next novel will be completely different from this, but I hope he comes back to this world soon. In the meantime, go, go get this.