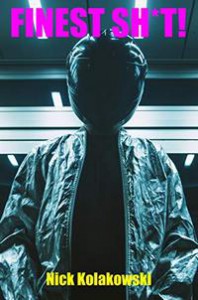 I'm going to be kicking off my involvement in #IndieCrimeCrawl with the latest from Nick Kolakowski. About a year ago, he emailed me to take a peek at his novel Boise Longpig Hunting Club, a fast, energetic, visceral read. Then came his Love & Bullets Hookup Trilogy -- which was as entertaining as you could want. Now it's time for his new short fiction collection, which I pre-ordered the instant I heard about it. One of the best things about Indie Crime Fiction is the depth of strong voices with perspectives you don't find every day. Nick Kolakowski is a prime example of this. Check out all of his work, you'll be in for a treat.
---

With a feral yelp, Raoul worked the dial until he landed on a station thundering drums and guitar, a solid backbeat for Luis and Jesus slicing and shoveling mounds of peppers and onions and pig. The music blasted the asphalt amphitheater of the parking lot, signaling that the truck was officially open for business.

The first customers drifted toward them. Give me your hungry, your nearly broke, your masses yearning for lunchtime deliciousness, Jesus thought as he wiped his hands on his apron and prepared to meet the first of the lunch rush. And I’ll give you two tacos for three dollars.

That's from "Taco Truck," one of the ten short stories that appear with a novella in Nick Kolakowski's latest collection, Finest Sh*t!: Deviant Stories. There are tales of revenge, heroism, thwarted revenge, and people driven to extremes no one should be driven to -- even some SF. Essentially, like with the best of Crime Fiction (no matter when it's set) we have people in desperate situations (sometimes of their own making, sometimes out of their control) doing what they needed to.

As with every short story collection, there are some of these short stories that really, really worked for me, and others that didn't do much for me at all -- that's just how it goes. But even the stories that I didn't appreciate had that Kolakowski quality that I've really come to enjoy.

The novella, The Farm takes up about half of the book. It begins in 1931 and ends in 2008, following one farming family through the generations. This family goes through wars, violent crime, financial hardship, betrayal -- and more than a few of the more positive parts of life, too. There's some poetry, too. I guess that qualifies as one of the more positive aspects, but I'm not always sure. In the end, I really liked this novella -- but it took some effort to get into it. That's probably on me. Kolakowski fits a novel's worth of a family saga into this roughly 100 pages -- which is quite a feat. There's part of me that would like to see it developed into a 350-400 page novel to flush out some of the details, but I think he's right to keep it brief. It alone is well worth grabbing the collection.

This collection covers all sorts of tones, topics and perspectives. As I've come to expect from Kolakowski, I wouldn't have predicted anything that I found in these pages. My rating may be on the low side, but that's just because I couldn't really sink my teeth into anything -- I typically rate short story collections low. But there's gold in here -- a little dross (but what I think is dross will probably appeal to others). If you're not familiar with Kolakowski, this is a great way to introduce yourself to one of the strongest voices in Crime Fiction today. If you are familiar with him, you don't need me to tell you how good these stories can be.