A dark comedy with a strong agenda and a sweet center 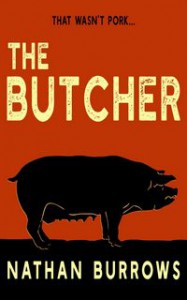 This is a pretty challenging post to write -- it feels like saying almost anything about this book will be spoiling something -- but that's simply not going to be the case.

We've got four major characters to focus on -- Andy Robertson is an intern in the marketing department of a local grocery store chain. He's as desperate to keep his job as the CEO of the company is to win the hearts and minds of shoppers, too). Emily Underwood is a rookie food inspector, having recently got far enough in her training that she can be let loose to do inspections on her own -- I don't know if this is more a commentary on the area she's assigned to or her luck (probably the latter), but she should have armed backup. The places and staff she's inspecting are so strange, you almost don't need anything else to make a fun read. Frank and Tom Prince are our last two -- they're brothers, struggling to maintain the family pig farm and butcher shop -- neither of which are having the best year, but maybe some good word of mouth an turn things around. When disaster strikes fro them at the farm, something happens that gives Frank the tastiest sausage they've had in ages -- and their customers think so, too.

Mix these people, concerns and places in life together and you end up with one of the zanier (but grounded) dark comedies around. This doesn't start out as Crime Fiction, but in a Fargo-esque turn of events, it ends up as one. (Either the film or the series will fill things for our purposes). Some everyday people get desperate, make some bad choices and things spiral out of control before they realize what they're doing/becoming.

The humor is hard to pull off -- there's some really dark material under consideration, and Burrows is also looking at political and societal trends to talk about here. It's an ambitious undertaking and he acquits himself well. I could've used another 2-4 more inspections by Emily. The book doesn't need them -- and honestly, they would've felt like padding. But I really liked watching that poor girl floundering through her career is fantastic.

This doesn't feel like a 316 page book -- anything north of 200 pages doesn't seem right (but what do I know?). Everything that happens, all the character moments, are tightly packed and blend together in a cohesive whole that seems ready to burst -- not unlike a Pinch's Sausage, I guess. Yet, Burrows keeps this from being convoluted and keeps it just on the complicated side -- given all the moving parts he's juggling that's a pretty decent accomplishment. From the great first chapter until the perfect closing line (I can't think of a better final line that I've read this year) -- this is a wonderfully constructed book.

A dark comedy with a strong agenda and a sweet center, this is a flavorful literary snack that'll be sure to bring a smile to your face and a chuckle along, as well. I had a great time reading it, and you will to.