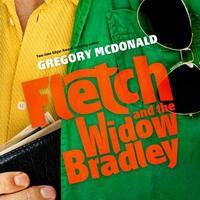 Fletch checks in to his office before returning from a few days away to find out that he's fired. He'd filled in for an injured colleague to write a profile on a small local business that the Gazette had written an exposé about a few years before, just to see how they were doing in the aftermath. They were doing fine, and Fletch had quoted recent memos from the CEO demonstrating that. The teeny tiny problem there is that the particular CEO had been dead for a couple of years. Quoting corpses is generally frowned upon (unless you're writing about voters' views on Chicago politicians, I guess), and so Fletch is fired. Not only that, he's probably finished forever as a journalist.

Understandably, Fletch is incensed. He's angry. He's also mystified -- he knows what he read. He knows he did good work -- how did they fool him? More importantly, why? If his career is over, he's going to know why it happened. So he starts interviewing those nearest the dead man -- his business associates, family, and so on -- he eventually flies across the country a couple of times (and up to Alaska, too).

At this point in Fletch's life, he is notoriously dead broke -- recently divorced (again) with attorneys looking for alimony payments, and (as mentioned) fired. So how does he afford the gas and airline travel? Well, he found a walled with a whole lot of money in it and cannot find the owner. So he borrows a little bit. This is a very odd little storyline that I honestly have never fully understood. Not the events in it, but the reasoning behind its inclusion in the book. Other than to give Moxie (more about her in a moment) and Fletch something to talk about, and to give Fletch money for plane tickets.

Now, close readers might pick up a thing or two (if they haven't read the books anyway) -- I said Gazette (the paper that Fletch was almost certainly fired from after Fletch) and "at this point in" his life and "recently divorced." This is the first time where Mcdonald bounces back in time for a novel -- this is why I've noted publication order and chronological order in my post headings for this series. Mcdonald needs Fletch to have a newspaper job to tell this story -- and post Fortune, that's not really likely (it's not like he needs the money). This chronological flexibility is both rare in a series like this one, and will become a hallmark of the books.

The best reason to read this book is the introduction of the character Moxie Mooney. Moxie's an actress -- daughter of the legendary Freddie Mooney -- a major acting star of both stage and screen. Moxie's still struggling to make it at this point, but she's got talent. She's also a long-time on-again/off-again romantic partner to Fletch. There's more chemistry between the two, more genuine feelings and more obvious compatibility between Moxie and Fletch than there is between any two people in this series. She's funny, she's quirky, she's driven -- not unlike Irwin Maurice himself. I'm not sure how often I would have re-read the book without her.

At the end of the day, this one doesn't have the same impact and entertainment value most of the rest of the series does. There are some great moments -- and I love Moxie -- but there's something missing from this one. Still, Fletch books are like that old line about pizza -- when it's good, it's really good; and when it's bad, it's still pretty good.