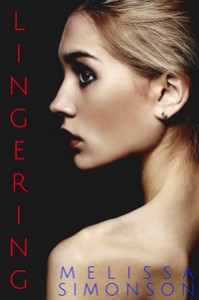 Typically, when I just quote the official blurb, it's because I'm feeling lazy -- or I don't like the book and don't want to spend energy coming up with my own synopsis. But this time, it's because I just like this so much:

Death doesn't have to be the end.

With Lingering, your departed loved ones are only ever a phone call or text message away.*
Say all those things you should have said. Get their advice, hear their comforting words. Let them celebrate your achievements and soothe your fears like they used to.
Everyone is welcome, and consultations are always free.

*Some conditions may apply. Please call our office for details.

That's all Simonson said when she pitched me the book. And it absolutely worked. Now, maybe it's because of what people typically try to get me to read, maybe it's because of what I was reading at the time -- I don't know why, but I took this to be a supernatural/urban fantasy/beyond the grave thing. It's not there in what she said about the book, but that's the impression that I walked away with.

It couldn't be further from the case, actually. In this case, the grieving client gives Lingering access to the dead person's social media, texts, emails, etc. and then using the kind of social engineering that Identity Thieves dream about, come up with an approximation of the dearly departed. Obviously, the more data given them, the better the approximation will be.

When Ben is approached by a strange woman while he's visiting his fiance's grave about five months after she was murdered, he obviously has no idea what he's in for. This stranger wants him to be a beta user for Lingering's services. Not only was his fiancé a prolific texter, she was a fashion blogger and vlogger -- so there was a lot of data to use as a source. After weeks of texting back and forth -- in which the software was able to imitate Carissa pretty well, they move on to voice calls, and so on.

Lingering is made up of one engineer/developer and his girlfriend who's in charge of recruitment and the business side of operations. We don't get to meet other clients, but they do exist (or at least did -- maybe they only have one beta at a time -- it doesn't matter). The engineer is a creep, and is clearly invested wholeheartedly (and maybe unhealthily) in this project. The recruiter, on the other hand, isn't as invested, but does believe in the project (or at least her boyfriend). Their involvement in this story keeps it from being your typical "Boy meets AI/Computer Simulation of a Girl" story.

Because in many ways this is that kind of story -- with the added twist of Carissa being the victim of an unsolved murder. But for anyone who's watched Her, Ex Machina, or even Electric Dreams most of this story goes just like you anticipate. The Lingering duo add in some interesting complications, as does the murder investigation looming over portions of it. Simonson tells this familiar(ish) story in a compelling way, with a hint of menace mixed into star-crossed love. It's tense, taut and heartfelt.

As the reader knows -- and Ben does, too -- he's not talking to Carissa. In his own words, it's "a machine pretending to be Carissa." But that doesn't stop him from sort of falling for her, and for the reader to wonder if there's a way for it to work out for them. Even as the reader and Ben both feel the wrongness inherent in it all. A feeling that's compounded as more about Lingering is shown to Ben.

Just with this, I'd recommend the novel. But that's not what makes this book a keeper.

Simonson gives us a protagonist that you can't help but feel for. The woman of his dreams, a woman out of his league that somehow truly loved him, his friends and family (well, maybe not his mother -- but she wanted to), the woman he would die for was stolen from him in the worst possible way. They have a big fight, he storms out and hits a bar for a couple hours only to come back to discover her body.

Ben plunges into depression and grief -- the only good thing to come out of things immediately is that Carissa's cat suddenly decides she doesn't hate him. His work suffers, his friendships and family relationships do, too (we'll come back to that in a minute). He eventually finds a friend in his grief -- Joe's wife died from cancer around the same time as the murder and the graves are near each other. As the two men visit the graves they eventually visit each other and establish a mutual support system (that involves a lot of alcohol).

While we get to know Ben, we get to know the (real) Carissa and those in his life. We can see the devastation that Carissa's murder has left in everyone's life. His grief is real, and his efforts to move on aren't that successful (they are half-hearted at best, too). Yes, Ben has a secret crutch helping him -- but this really could be diving into work, substance abuse or something else -- in a sense Simonson could've used anything here to give Ben a reason to keep going, she simply chose a machine pretending to be a person.

Joe doesn't have Lingering, and he doesn't seem to have much of a support network, either. He has Ben and alcohol. And memories. Many, many memories. As wrong as Ben's "relationship" with cyber-Carissa is, he does seem to be functioning better than Joe, and the reader has many opportunities to see that. But man, Joe's experiences are genuine, his pain is real. Ben's got something keeping him from those experiences, and you can't help but think how bad this is for him.

One of the many people almost as devastated by Carissa's death was his young cousin, Kylie. I'm sure we're told her age, but I don't remember -- I'm going to guess 8. Young enough that Goosebumps and Baby Sitters Club books are age-appropriate, but maybe a little advanced. She's a good enough reader that they aren't really her speed anymore, though. She calls Ben her uncle (he's too old to be a cousin in her view). The two of them have a very close relationship, and Kylie will spend time at Ben's house after school and the two of them make regular runs ot the library and read together frequently. While there's almost nothing in this book that I didn't like -- my favorite parts involve Kylie.

Early on, they find themselves at a Library book sale and Kylie talks him into buying her The Art of War as well as Little Women (they only tell mom about one of the purchases). Throughout the book the two will read Sun Tzu together, Ben helping Kylie understand (and apply!) the classic. He picks up a handy tip or two from the old warrior/philosopher, too. Those scenes are priceless -- warm, cute and insightful. Kylie's a great addition to the book and humanizes Ben in ways that nothing else can. If Simonson needs a side project, an edition of The Art of War annotated with commentary by Ben and Kylie would be an insta-buy from me.

Thanks to watching Ben with Dexter (Carissa's cat), Joe, his friends and, most importantly, Kylie you learn to care about him and his loss. You understand what he's missing in his life and the degree it's affecting him. So when things happen with Lingering and cyber-Carissa, you care about that. It's not just some dopey guy being taken in by a computer generated fraud (that he signed up for, don't get me wrong) -- it's this character you care about risking everything for some clever software.

The writing was excellent -- I don't think I had a negative note anywhere. The closest came when Ben was trying to box up Carissa's clothes and I said something about how hard it was to read. The grief is real and palpable throughout the book, and really strong in others. All the characters are well drawn and developed -- even those we spend only a few paragraphs with. The merging of the SF-ish elements with the story of Ben trying to recover from the death is really well done and adds shades and nuances to both, making the novel stronger.

Simonson took a lot of care about the appearance of the book, too. Which is important (maybe more so for a self-published book than one put out by one of the bigger houses). That's an eye-catching and fitting cover -- but even the graphic elements dividing up the text aren't run of the mill and are attractive (I read a book a couple of weeks ago that went for an atypical graphic element, but I couldn't tell what it was -- nor could other readers that I talked to). I really appreciate it when people go to the extra trouble that someone clearly did here.

I'm not sure if this is really Science Fiction, but it has some SF elements. There's a touch of a thriller about it, too. But I wouldn't categorize it there. Maybe just General Fiction? But it feels too genre-adjacent for that. Eh, just categorize it as a read for people who like good things.

I can't think of anything else to say here, really. This is an excellent read that totally sucked me in and wouldn't let go. I spent a lot of time thinking about it between reading sessions, and have mused about it frequently since I finished, too. I guess you could say it's lingering on in my mind. But you shouldn't, because that's just lazy word play, and we're all better than that here. Just go read the book, okay?

Disclaimer: I was given a copy of this book by the author in exchange for this post and my honest opinion.