Out along the edges, Always where they burn to be 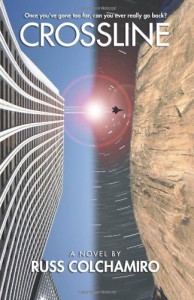 Marcus Powell is a test pilot -- not something you think about much anymore, but SF and adventure tales have started with them long enough to strike a classic chord. You're instantly put into a certain frame of mind -- and then when you see he's on the launching pad, well, it almost guarantees a good time. Since he hits space very early on in the book, you know things are going to get interesting right away.

Because the next thing you know, he's zipping around the outer parts of our solar system and then he finds himself in a parallel universe on a world that's remarkably like our own -- yet is very different. Thankfully the language -- and slang -- is largely interchangeable so Powell can get along just fine. But the differences are very striking and could get him in serious trouble/danger.

Back on Earth -- as Powell is bouncing around that other planet, we get to meet a pilot from the parallel world that came to Earth. As much as this is Powell's book, I found this guy a lot more interesting -- but we get his story told mostly in summary form, while Powell's is told to us in much more detail. So you'd expect that he'd be the one that readers get into. Now, I do -- Powell's a great character, and if we didn't get the other pilot's story, I'd have been very content to read about him.

While Powell runs around that other planet, trying to figure out how to get home we get to see the societal turmoil that covers the North America-ish place. We meet a wise man who has visions, some dedicated warrior women (and men), an incredibly creative baker, and a disturbed killer. You know, the usual. As Powell aligns himself with one warring faction, he finds himself in a different kind of danger than he's used to as he tries to find his way home. On Earth, the danger is largely off-screen and the battles take place in the boardroom and the weapons are money and influence. While Powell has to deal with explosives, bullets and knives. Both types of warfare can result in fatalities

On Earth, we also see what goes on with Powell's wife and daughter as they deal with Powell's absence. His wife was less than supportive before he launched, and that's haunting her. His daughter, who shares something in common with the wiseman on that other world, never loses hope. It's hard to know if that's because she's young and naive (5 or so) or if it's because she knows more than you'd expect. I had more fun reading about Powell's daughter than I have with pretty much any character this month, she's simply a delight. The granddaughter of a Native American seer (of sorts), this little girl knows things she shouldn't anf has a certainty about things she has no business knowing about. She's the embodiment of precocious, basically. Her mother is a caring and very outspoken teacher, the two of them together make a formidable team.

Everywhere you turn, the motivation driving the characters is family -- protecting, avenging, trying ot live a life worthy of them, trying to hold on to, trying to get back to, trying to provide for . . . This is at once an incredibly believable driving force for a character, and incredibly relatable one. It's a great way to get your reader on the side of every major character. It's easy to forget the human element in a SF adventure -- the advanced science, the fantastic technology, the wormhole creation, etc. can easily become the focus. But Colchamiro doesn't let that happen, what keeps his characters moving, what keeps them going on -- it's all realatably human.

I'll admit, I don't think I got all of the mystical/spiritual/supernatural aspects that Colchamiro brought to the table. I think that's largely on me, and there are going to be readers who love that part (and I thought it an interesting approach to take_. Similarly, there's a little plot element makes no sense to me at all. It's brought up early on when Powell launches that is returned to a couple of times, and then comes back in a pretty serious fashion in the closing pages, and drives the last action scene. It could be cut entirely and make no difference to anything (except the aforementioned action scene would have no justification and would have to be cut -- which would be an improvement). There's no reason for it, it doesn't help the characters or the plot at all. Maybe it played a decent role in an earlier draft, but not now. Here's the nice thing about it -- it's so extraneous that you can just ignore it and the story doesn't suffer at all. I'm being vague here, I know. My point is (or it was supposed to be) is that there are some problematic parts of the book -- but there's enough right going on here that it doesn't matter.

That aside, I thoroughly enjoyed this book. I had plenty of fun with it. Colchamiro kept things moving well, he surprised me a couple of times and got me grinning and cheering. I found myself very invested in what happened with both pilots and wanted them to find what they're looking for. Strong action, strong characters, a compelling take on the multiple worlds idea -- and a whole lotta fun throughout. I can't point to every part of this book that makes it appealing -- most of it is in the intangibles. As frustrating as that might be when writing about a book, while reading it? It's hard to ask for more.

--
Disclaimer: I received a copy of this book from the author and Lola's Book Tours, which I appreciate. The opinions expressed are my own -- especially the seventh paragraph.