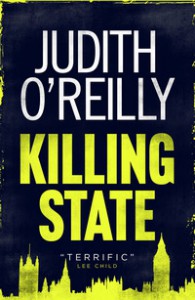 “You should come with me.”

He turned over the offer in his mind.

Because she was stop-your-heart beautiful.

Then again, the world teemed with beautiful women. Because he wanted to know how it ended.

What happens when an assassin doesn't get the expected reaction from his target? Honor Jones, MP, tells him to let her finish her cigarette and asks him a question, "Where's Peggy?" The assassin in question, Michael North, doesn't know who Peggy is, much less where she is. What he does know is that he can't kill this woman -- maybe it's because (unlike the rest of his targets) he wasn't given a reason for her execution, maybe it's her attitude, maybe he's just getting tired of killing (not to be confused with Martin Q. Blank's newfound respect for life) -- certainly her beauty doesn't hurt.

His refusal to kill her doesn't go down well with his employer -- an extra-governmental body dedicated to the preservation of the British government. That morning, he's contacted in person with strict instructions to get the job done or face the (fatal) consequences. Instead, North tried to get her out of the country and ends up saving her from a different assassin. Not very shockingly, North also finds instructions to kill him on this assassin's corpse. By this point, North is smitten with Honor and is committed (whether either of them consciously realize it) to helping her survive and find her friend Peggy.

At the moment, it's clear that Honor's search for her dear friend is tied to the kill order. Peggy's an astronomer, largely apolitical, and not tied to any endeavor that would normally put her on the radar of anyone outside of astronomical/academic circles. Nevertheless, she's somehow set these dominoes falling, and now Honor and North are running from killers across the country as they seek to learn why Peggy has disappeared.

This hunt for Peggy will push North and Honor to -- and past -- their limits. It will see them both injured. Both under threat of grave bodily harm (and death) through violence -- and both will have to take steps to defend themselves. Around them, the culture and government face shifts and challenges from within that threaten to change everything that Britons know about themselves. On top of all that -- there are some great character moments, real growth and change that happen ways that you can believe -- not just the clear result of authorial fiat, but because that's what happens when people face what they did.

Plots involving large-scale conspiracies frequently leave me cold -- O'Reilly not only convinces me that her conspiracy is worth reading, but she's effective enough with it to make me enjoy it. I struggle to accept plots involving psychiatric professionals and loved ones trying to convince a character that the reality they know (and the audience knows) isn't real, but is the result of delusion brought on by some psychological condition. Now this one isn't as involved as say, "Normal Again" from Buffy the Vampire Slayer, but it's there -- and O'Reilly sticks with it long enough to accomplish what she needs to for her story, but she doesn't milk drama out of it. There are a few other things like this -- tricks, plotlines, tropes -- that I typically avoid or get annoyed by, but I accepted and enjoyed here.

My notes are filled with "O'Reilly isn't going to try ___, is she?" entries, followed by "Yeah, she is -- and it works." She squeezes in so many of these things that I'm tempted to doubt my memory about them -- and I'm writing this less than a day after I read it! For reasons of space, time, and readability I've limited myself in what I've addressed in this post. I had a lot of other things I wanted to say, and even had drafts talking about. But I ended up restricting myself -- not just because of spoilers (though, as always, that's part of it) -- but because O'Reilly stuffs this novel with so many ideas, plot points and details that I can't talk about it all without the post becoming unreadable. I don't know how she manages to put it all in while maintaining the pounding pace. It's truly noteworthy and laudable that she pulls it off. I can't even express this without producing an ungainly paragraph.

Michael North is a larger-than-life character, but honestly more grounded in reality than many assassin/lone warrior types in Thriller fiction. Part of that comes from O'Reilly's restraint in describing him -- he's never depicted as anything superlative. He's simply a skilled and surprisingly dedicated combat veteran in a series of tight situations that even he is shocked that he survives as long as he does.

Similarly, Honor is one of many beautiful women in the world (as North himself notes above) -- she's one of many dedicated elected public servants, she's one of many people who've overcome difficult pasts thanks to the help of a friend/loved one. She also isn't depicted as a superlative anything -- just the right person in the right place at the right time. Even if that right place is in front of Michael North's knife. And yes, the name Honor is ripe with possibilities and symbolism -- O'Reilly takes advantage of it. Not as much as some authors would've, but she gets her money's worth out of the name.

There is an plausibility-stretching character -- a young computer whiz (actually, she's something beyond whiz, but I can't think of a term that fits her), who North allies himself with temporarily. But between her attitude and role in the overall story, I can't see any reader not suspending disbelief enough to embrace her.

Most of this book takes place in moral gray areas (as it almost has to given North's profession), but that doesn't stop O'Reilly's villains from clearly being villains and her heroes clearly being heroic. Killing State doesn't try to go for some sort of situational ethics or a "yes, but" approach to the morality of te characters -- which may or may not have been successful.

The plot moves like the proverbial roller coaster -- ups, downs, rushes, and loops all at a pace that you just hope to keep up with. Fair warning -- once the hook is set (and it'll be early on), you won't want to put the book down and you'll likely get in trouble with deadlines and schedules. Things won't really end the way you expect them to -- I had a handful of expected conclusions that I had to discard along the way (although some I didn't have to discard until the last moments) -- but when you're finished with the book, you'll likely realize that there's no other way for things to have fallen out.

There's a sequel expected later this year -- I honestly can't imagine that it'll be able to live up to this. But I wouldn't put it past O'Reilly to confound my expectations again. I had a lot of fun with this novel and was regularly impressed with O'Reilly (and North and Honor). I expect that I'm not alone, and soon I'll see a lot of very positive buzz surrounding this book.

---
My thanks to Love Books Group for the invitation to participate in this tour and the materials (including the book) they provided.