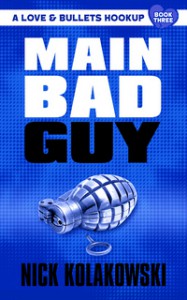 Yeah, weird day for me to post something like this, but it's what Kolakowski asked for -- and he wasn't a jerk about it like the last guy who wanted a Saturday post. I also did a quick Q&A with the author.

Bill could tell you all about things going haywire.

How the hell had he agreed to this insanity?

The answer was obvious: They had no choice.

It had to come down to this, didn't it? After being on the run for a book to a book and a half (depending on the character), Bill and Fiona have to face off with the Dean, the Rockaway Mob leader who put out the hits on them both. They really don't much choice, the whole starting over quietly thing didn't work too well. Or at all.

This picks up right after Slaughterhouse Blues, the pair are having a difficult time getting out of New York, and ultimately find themselves locked in a panic room at the top of a skyscraper, surrounded by Crow Man -- "a stellar chemist, and a better botanist" -- his crew, and his product. Which is a pretty awkward place to be. Unsurprisingly, Crow Man works for the Dean (don't you love these names?). The Dean had been having a pretty lousy day up until this point -- and when the Dean has a bad day, a lot of people suffer. Then things start looking up, and the Dean is handed two of his most wanted on a silver platter.

Meanwhile, a mysterious figure named Walker is making his way from Canada to New York. He's seen that the pair found some trouble in Oklahoma and assumed Fiona wold need help. By the time that word got out that they were in New York, he was already on the way, knowing that'd be the case. Walker is one of those classic aged "been there, done that" characters. The old pro who's tried to retire and ends up having to get back into action one more time -- which is good, because they really don't do well with the quiet life anyway. I'd sign up for a series focusing on him in a heartbeat. I'd almost say this is worth reading just for Walker -- even if you know nothing about Bill, Fiona, the Dean, etc. Eh, I'll go ahead and say it, read this just for Walker. But you'll like it more if you've read the others.

Walker's travel is beset by trouble from uneasy allies, his age, and just how much the city has changed. One of the best scenes with him starts with Walker revisiting a favorite dive bar that had been "gentrified into a monstrosity" where he felt like he was "attending a wake for someone that nobody in the room had liked" in the middle of the velvet art, sky-blue walls and pop music. Kolakowski grounds this with reflections on September 11 and the effect it had on the City and its citizens -- making it more than just a fun moment in the book. The intelligence he picks up in the bar justifies his brush with gentrification and enables him to come to Fiona's aid. Hopefully in time.

Bill and Fiona are great together, their dialogue crackles. Watching these two try to get out of Dodge is so much fun, you find yourself wishing that Kolakowski had figured out way to stretch this into a quatrology. One of the problems I had, I now realize, with Slaughterhouse Blues was how little Bill and Fiona were together. They spent a lot of A Brutal Bunch of Heartbroken Saps apart, too -- but that was different. Bill's a better character with her around, and Fiona works better too -- if for no other reason than she has to be a bad-ass and watch out for him, instead of just being pure bad-ass all the time. I'm not sure that makes sense to anyone not living in my head. Hopefully it does.

There's excitement, there's gunplay, there are explosives, violence, witty dialogue and a whole lot of bad-ass characters facing off with each other (and Bill's around, too). This is the literary equivalent of a Martin McDonagh film (when he's in a more playful mood) -- or, if that doesn't work for you, think Fargo meets Tarantino, but not as long-winded. Kolakowski ties this to A Brutal Bunch so well (and in ways you won't expect), providing a perfect ending to this saga. There are so many quote-worthy lines in this brief novella that it's driving me crazy that I can't work more of them into this.

A lot of novella-series can be read in a clump, like one big novel. This is not one of them. Each novella has its own feel, its own themes and structure -- while being one story. Last year, Kolakowski impressed me with his novel, Boise Longpig Hunting Club, this series has shown me that wasn't a fluke at all and that I need to read anything I can by him.

I can't tell you what's holding me back from making this a full 5 Star, but something is. It's close enough, though (and on Amazon/Goodreads, I round up), so I don't feel too bad about chopping off that half-star here. But focus on the important things here -- it's a great read, a great conclusion and about as much fun as you'll have in a thriller this year. Bill and Fiona are a great couple (at least in fiction, they'd probably crash and burn in real life) -- and a lot of fun to read about.