Once Again, the Lori's (almost) in Over her Head 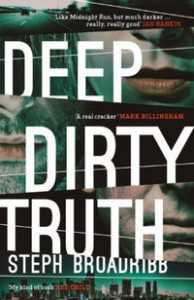 After all the drama and trauma of her recent past, Lori is taking only easy assignments -- her life needs to coast for a bit. Naturally, that's not going to work too well (why would we read about that? Also, why would Broadribb be nice to her now?) -- she'd kidnapped by the Miami Mob and we readers have to be braced for all sorts of nasty things to happen to her. And while it is nasty -- no one is prepared for what happens to her.

They want her to do a job for them. If she succeeds, they offer to wipe the slate clean. If she fails (or refuses), she, Dakota and JT are dead. Honestly, there's a pretty good chance they'll die no matter what, but there's a chance with the former. All she has to do is retrieve the "numbers man" for the family, currently under FBI protection before he testifies against the family in a couple of days. It's pretty cool to see how good Lori does at this until things go horribly, horribly wrong (not much of a spoiler, really -- the book isn't going be too suspenseful if she has an easy time of it).

Meanwhile, JT and Dakota run to safety -- which goes only slightly worse than Lori's assignment. JT isn't anywhere near as healthy as he should be to handle this kind of thing -- but he doesn't have much of a choice. It's his little girl, what else can he do? It's great to see JT in action like this. But at some point, at the rate things are going for her, Dakota's going to end up catatonic or like the little girl in <b>Logan</b>. My money's on the latter.

So we've got the Mob on one hand, the FBI on the other, and a distinct lack of options for this family -- it's all about survival. The longer you're alive the more opportunities will present themselves to extricate yourself from this Catch-22. As much as Lori (and JT and Dakota) is tough and resilient, it's her ability to improvise, to think quickly and to pounce on the chances that life gives her that makes her an action hero to pay attention to.

A female bounty hunter with skills and the kind of grit you want to see in an action hero, Lori is a great character. The physical toll on her in this novel is up there with the psychological toll previous adventures have taken on her -- not that she gets out of this one emotionally/mentally unscathed (nor did she get out of the previous adventures without a physical injury or 8). She's smart, determined and prepared to dish it out as well as take it.

I walked away from book 2, <b>Deep Blue Trouble</b> with a pretty strong idea about what book 3 was going to be about. I was wrong, but I'm pretty confident that I know what book 4 will be about (at least initially). I'm very glad to be wrong, actually -- because this was a lot of fun, and sets things up to be a more satisfying version of the story I imagined Broadribb would be telling. I'm eager to find out how wrong I am about book 4 (because I will be).

I've spent about a month working on this post in fits and starts, because I'm having a hard time saying something about this book that I didn't say about the other two. Broadribb started off strong -- a veteran from the get-go, and the other two have been of the same quality. Consistency is great when you're a reader -- but it's hard to write about. So I give up -- I'm not going to have anything insightful to say or any dazzling or penetrating analysis to offer. I'll keep it basic -- <b>Deep Dirty Truth</b> is a good, fast-paced, white-knuckle ride written by someone who knows what she's doing. Go read it.