A Mix of Common Sense, Cynicism, Self-Aggrandizement, Clever Writing, and a Great Narrator 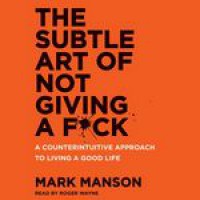 I'd seen this book around, and let my eyes slide right off given the title. Clearly, it wasn't for me. Then a couple of months ago, I heard it referenced in a couple of podcast interviews (no, I don't remember who talked about it -- but at least one of them said something thoughtful about it) and my cubicle-mate listened to it at the same time and seemed to enjoy it. So I figured I'd give it a shot. I'm very glad I did, really.

I'm also glad that HarperCollins' website gives such a thorough blurb about the book, which will save me so much time -- so let's take a moment to read what they said:

In this generation-defining self-help guide, a superstar blogger cuts through the crap to show us how to stop trying to be "positive" all the time so that we can truly become better, happier people.

For decades, we’ve been told that positive thinking is the key to a happy, rich life. "F**k positivity," Mark Manson says. "Let’s be honest, shit is f**ked and we have to live with it." In his wildly popular Internet blog, Manson doesn’t sugarcoat or equivocate. He tells it like it is—a dose of raw, refreshing, honest truth that is sorely lacking today. The Subtle Art of Not Giving a F**k is his antidote to the coddling, let’s-all-feel-good mindset that has infected modern society and spoiled a generation, rewarding them with gold medals just for showing up.

Manson makes the argument, backed both by academic research and well-timed poop jokes, that improving our lives hinges not on our ability to turn lemons into lemonade, but on learning to stomach lemons better. Human beings are flawed and limited—"not everybody can be extraordinary, there are winners and losers in society, and some of it is not fair or your fault." Manson advises us to get to know our limitations and accept them. Once we embrace our fears, faults, and uncertainties, once we stop running and avoiding and start confronting painful truths, we can begin to find the courage, perseverance, honesty, responsibility, curiosity, and forgiveness we seek.

There are only so many things we can give a f**k about so we need to figure out which ones really matter, Manson makes clear. While money is nice, caring about what you do with your life is better, because true wealth is about experience. A much-needed grab-you-by-the-shoulders-and-look-you-in-the-eye moment of real-talk, filled with entertaining stories and profane, ruthless humor, The Subtle Art of Not Giving a F**k is a refreshing slap for a generation to help them lead contented, grounded lives.

Sure, some of that is overblown -- its point is to sell you the book, right? But, by and large, that's a good summary of the book's highlights. Manson's point isn't to stop giving a f*ck period, it's to give fewer f*cks in general and to make sure the f*cks you give are for the right/important stuff in life. That's pretty basic, but pretty easily ignored advice: everything seems important, but not everything is. Focus on the important stuff, care about that, and let the rest go -- if it works out, great. I'm not sure if this is different from Carlson's book Don't Sweat the Small Stuff -- but it probably has more laughs and profanity.

Manson is entirely too impressed with himself (or at least he comes across that way), and he never convinces me that there's a reason to heed his advice over anyone else's. But on the whole, what he says makes a lot of sense. Do I think that ultimately, this is all a house of cards that won't stand intense scrutiny? Yup. But I think that of every bit of man-made advice -- Manson's is more amusingly delivered than most, and won't get the devotee into too much trouble if they apply this recklessly.

Roger Wayne's narration elevates the entire thing -- there's not a moment that I don't confuse his voice for Manson's. It felt like I was attending one of the most intense self-help seminars in history and that Manson got going and just wouldn't stop (not that anyone tried to make him). Wayne added voices (his Disappointment Panda voice is the best character I've heard in an audiobook since Luke Daniel's take on Hearne's Oberon), flair and a sense of passion to the text. When Manson approached poignancy, Wayne made it all the more so. Fantastic work.

I'd probably give this 3-stars if I'd read the text -- amusing, thought-provoking, with some good advice. But, you add in Wayne's narration? I've got to bump it up to 4. Seriously, he's just that good. This isn't a book for everyone (I know several readers of this blog that should avoid it just for the language), but for those who are capable of sorting out the wheat from the chaff -- this is a fun and potentially helpful read.