Tromly (and Digby & Zoe) saved the best for last. 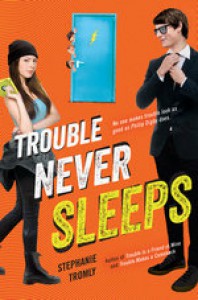 This picks up right on the heels of Trouble Makes a Comeback leaving Zoe and Digby (and their friends) to deal with the social fallout of the events of that party. Then and only then can they start to decide how they're going to deal with the deal Digby was offered: steal some top-secret research data in exchange for information on his sister's whereabouts. Sure, it's technically treason and will likely end up destroying Digby's life as well as the lives of Felix's family.

Meanwhile, there's a complication to the caper in the last book -- Zoe left something tied to her in the evidence collected by the police. The repercussions of that caper are also in danger of hurting some of the students they set out to save.

Both stories are good uses of the characters, and were strong stories on their own. While I have enjoyed Digby's schemes and how they work out (or how they almost do), but I had a hard time swallowing his plan (or how it was carried out) for the non-high school caper. By the way, it took several tries to stay away from spoilers in that sentence.

However, once I decided to not care about how outlandish it all was, I enjoyed reading it.

The key to this book -- series, really -- are in the characters and their interactions. Not just Zoe and Digby (but nothing's more important, or better, than that), but Zoe and her mom, Zoe and her friends/frenemies/enemies at school, and Digby's strange interactions with everybody. I don't know if Tromly hit that better this time, or just as well has she had before -- either way, the dialogue sings and you believe it. These relationships are complicated and real and they make the books come alive.

I should probably add that the reason I didn't listen to the audiobook (unlike the last two) is because my library didn't have a copy, unlike the last two. It's not a reflection on Kathleen McInerney's work -- it was good for me to see that it was Tromly's words and not just McInerney's great narration that hooked me, though.

It's hard to talk about this book in any kind of depth without spoiling book 2 and ruining things here. So I'll stop now. It's a fun adventure, with laughs, tension, and all the warm fuzzies you could ask for.

The trilogy started off strong, stumbled a bit and then more than recovered with this one. It's the strongest of the series easily -- and sticks the landing (which I worried about, not because I didn't think Tromly could do it, it's just easy to miss). I'm going to miss Zoe and Digby. I'm so glad that I found this series this year -- it's been a blast to listen to and read. Great characters, strong character arcs over the trilogy, a good overall story, with some great smaller stories in the individual books. This series is going down as one of my favorite YA series ever.