A light, cozy snack of a mystery novel to kick off a new series. 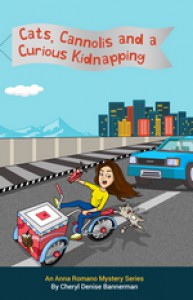 I tried so hard to work in a Clemenza joke here, even if it seems a bit obvious to do so. But I just couldn't.

Anna's a mystery writer -- successful enough that she can be a full-time author (a rare breed nowadays) -- a doting cat owner, and a pretty decent cook. All in all, the kind of person you'd want to spend time with (especially if you don't have to deal with cat hair). She's single, and is trying hard to convince herself that she's okay with that (but it's getting harder). We first meet here when she has an odd encounter with a man at a signing at a bookstore, but doesn't think much about it.

Not long after that, however, that man shows up in her life here and there -- and she starts to get worried. After one incident where he grabbed her momentarily, Anna tries to report it to the police, and is brushed off. So she's driven to take the skills her characters display and use them for herself to try to figure out what this man could be up to. While Anna is pulling her Ian Ludlow act, the stalker steps up his act and next thing Anna knows, she's been kidnapped and is going to have to fight to survive and get back to her cats. Meanwhile, the one police officer that took her seriously finds himself practically obsessed with her case once she goes missing.

We get this story told to us from three first person narrators -- Anna, her stalker, and Det. John Solace. Solace is the detective who takes the stalker report seriously and investigates when things get more threatening. Sometimes I find that kind of thing to be a choice that doesn't help a story, or sometimes I think it hurts -- but here, this really helps. This novel wouldn't work as well if you took one or two of these narrators out. Anna's voice is the strongest, the most approachable -- but even our villain is someone you can enjoy reading. Even when things get dangerous, the voices (to varying degrees) stay breezy, conversational and approachable. There is a sense of fun that pervades this work, and it's what makes this as successful as it is.

I do wonder about the rapid nature of the romance, it seemed a bit rushed. Then again, it's more satisfying than the 5+ years that the Cormoran Strike/Robin Ellacott build-up has gone on (at least for the readers) -- so who's to complain?

I do think that this book needed an editor -- and I'm not talking a copy editor (although, that could've helped, too) -- a strong critical pass or two to strengthen the strength points and cut the weaknesses from this and I can easily see this gaining fans by the bucket-load and even jaded guys like me being able to be effusive with praise. But as it is, I can just say that this is a cute story with a lot of charm -- and charm goes a long way. I could list the issues this book has -- and under different circumstances, I might. But why? Bannerman's not trying to be the next Don Winslow or Jacqueline Chadwick. This is supposed to be a breezy little cozy, and if you sit back and let it be that, it succeeds.

If you're looking for a light, sweet literary snack -- a cannoli, if you will -- this'll hit the spot. Give it a whirl. The sequel is set to come out in January, so you won't have to wait too long for another bite.

My thanks to damppebbles blog tours for the invitation to participate in this tour and the materials (including the book) they provided.