From Wallflower to Most Wanted -- the Story of Jen 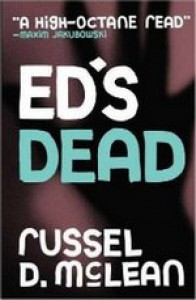 Going to keep this brief -- like the book itself.

Here's the back-of-the-book blurb -- which provides a couple of details I don't think I would have, but I'm not sure how you talk about the book without giving.

<blockquote>Meet Jen, who works in a bookshop and likes the odd glass of Prosecco...oh, and she's about to be branded The Most Dangerous Woman in Scotland. Jen Carter is a failed writer with a crap boyfriend called Ed - who she accidentally kills one night. Now that Ed's dead, she has to decide what to do with his body, his drugs and a big pile of cash. And, more pressingly, how to escape the hitman who's been sent to recover Ed's stash. Soon Jen's on the run from criminals, corrupt police officers and the prying eyes of the media. Who can she trust? And how can she convince them that the trail of corpses left in her wake are just accidental deaths? A modern noir that proves, once and for all, the female of the species really is more deadly than the male.</blockquote>

Jen is a character we've all seen before -- she's not assertive (especially when it comes to this horrible boyfriend), she lets her boss push her around -- actually pretty much lets everyone push her around, actually. Until she Ed meets his untimely end. This breaks things open for her -- she has to take steps to preserve her life and freedom. This sort of carries over into other aspects of her life -- and when the criminals, corrupt cops, uncorrputed cops, school friends, and everyone else comes calling, she finds herself being assertive, daring, and even brash.

Once things get moving in this book, they don't stop -- McLean's prose is lean and gripping. It's the right match of voice, pacing and content. The characters may not be the most well-rounded, but they don't need to be for this to work. There are some more developed than most, true. But this isn't the kind of book filled with fully-developed characters, it'd just slow things down. You get enough to meet the need of the plot, and nothing else. It's all about keeping things moving at a good clip. I couldn't take a steady diet of that kind of book, but when done right (as it is here), it can make for a great ride.

I read this so quickly I couldn't believe when it was done -- the prose moves quickly, the pacing is great, it's like an out-of-control train plummeting down a grade, and all you can do is hold on and hope that safety gear works. It's violent, action-packed, and adrenaline-fueled -- most importantly, in the middle of the tumult and destruction, Jen finds a way to exercise agency, which is great to see -- and somehow throughout it all, there's a sense of fun that permeates everything without toning down the brutality.

This isn't going to be everyone's cup of tea -- but if you read that blurb above and think, "that could be fun," you're right. Give it a whirl, you won't be sorry.