A Great Spin on Contemporary Fantasy Kicks Off a Promising Series 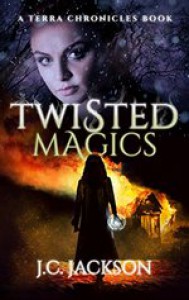 I had a brief conversation a couple of weeks ago with J.C. Jackson and she described the book as "Science Fantasy" and told us a little about the series. Something about fantasy characters but with modern technology, but phrased better. Not really getting what she said, I asked why not just call it Urban Fantasy, and she gave a decent answer -- basically that she didn't have enough vampires or werewolves in the books so readers told her she couldn't. I was a chapter or two in to the book when I figured out what she was saying.

In your mainstream Urban Fantasy, you have fantasy creatures -- wizards, druids, werewolves, fae -- popping up in our world. On the other end of the spectrum (or an other end, anyway) you have things like the Eddie LaCrosse novels or the Dragon Precinct books that have modern ideas (police squads, private investigators) used in a fantasy series. Jackson takes a different tack -- it's a typical fantasy novel in that there's a lot of magic, elves, halflings, Dark Elves, living next to humans -- very standard kind of thing, but their technology matches ours (actually, it's slightly more advanced). I loved this approach and there's a good chance that I'd have had nice things to say about the book just because of this idea.

I do have more reasons to say nice things, though.

Ketayl is an Elven mage who works as a a CSI-like lab tech for the Terran Intelligence Organization (a FBI-like organization). Her strength is in finding ways to use devices to do forensic investigation of magical elements of particular crimes. She's not the most socially adept of people, clearly more secure in her lab and with clearly drawn rules governing her interaction with others.

Then there's an explosion in the Elven Territories, seemingly magical in origin -- definitely devastating. The TIO director sends Ketayl, along with the rural tracker, Retanei; and Artemis, Retanei's wolf companion to investigate. Along with the local TIO team -- which does their best to bring these agents into their community -- they dive into finding those responsible. It's a kind of magic that doesn't play by the rules that Ketayl is used to, and powerful enough to make her nervous.

While they look for what could have caused this destruction, we learn more about the world, the magic system and Ketayl. I still have a few questions about all of those and I think some of them should've been addressed in the first book -- but I never felt lost in this world as I waited for the details to be given. This is a pretty decent thriller when you strip away the fantastic elements, or a pretty decent fantasy tale if you take out the criminal investigation elements. Keep them combined and the whole thing is stronger.

Eventually, the TIO hires a consultant from the Paladins -- their kind of music is very different from Ketayl's. The Paladins are also very prejudiced toward other magic users, and other species. Thankfully, the Paladin sent to help the team (Silver) is pretty open-minded and doesn't get driven right into a religious conflict (which doesn't preclude other kinds of conflict). Silver joining the team -- primarily partnering with Ketayl -- brings her out of her shell a bit.

Ketayl frequently reminded me of Tilly Bradshaw, the analyst from M. W. Craven's The Puppet Show (one of those books that I somehow haven't had time to blog about, but you should read, if only for the Ketayl-like character). She's a complex character that I look forward to learning more about. The rest of the characters -- with Silver pretty much being the exception -- aren't as developed as you might like, but you get enough of to satisfy just about every itch you might have.

There were a few too many typos for me, and the misspellings/unfortunate slips like homonym confusion. It wasn't horrible, but it was bad enough to stick with me.

The novel does a good job of introducing us to the characters and world while telling a compelling story. Jackson's particular spin on merging fantasy and a 10-minutes-into-the-future world is refreshingly original. I liked the characters, the world and everything -- I've already gone out and purchased the sequel and am trying to find time on the schedule to get it read.