Jesse Stone is Clean, Sober and in Dire Straits 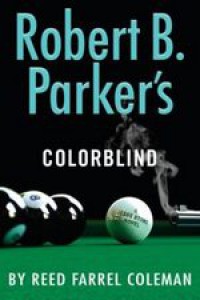 This is Coleman's fifth Jesse Stone novel, the seventeenth in the series overall and Coleman has really put his stamp on the character here. He's made the series his own already, adding depth and shades of color to characters that've been around for years, don't get me wrong. But everything he's done could be changed, dropped, or ignored in the next -- like an old <b>Star Trek</b> or <b>Columbo</b> episode. But following up from the closing pages of <b>The Hangman's Sonnet</b>, in <b>Colorblind</b> he's enacted permanent change on Jesse -- yeah, things might not go smoothly from this point -- he may stumble. But things won't be the same -- cannot be the same without some sort of <b>Star Wars</b> Expanded Universe level retcon. But I'm getting ahead of myself.

First we need to start with the crime part of the novel -- it's ostensibly what people are buying this for, and the novel's focus. I can absolutely see this happening in Real Life &trade; -- a white supremacist group from New York is attacking mixed race couples (and by "mixed," I obviously mean one white person and one person from another race -- they wouldn't care if an Asian man and a Hispanic woman were together) and spreading propaganda in Paradise, of all places. There's a reason Paradise was chosen -- several, actually, and it actually makes sense in context -- it's not just a convenient way to get it into a Jesse Stone novel. Only one of the crimes involved is technically something that Jesse is supposed to be investigating.

Once one of his officers becomes embroiled in this series of crimes -- and the possible target of an elaborate frame job -- Jesse stops really caring about things like jurisdictions, and will stop at nothing to find the truth. If there's a connection between the different crimes, he'll find it. The question he has no answer to is: for what end? Why are these people in Paradise? What do they have to gain from framing his officer?

Yes, certain elements of this story stretch credulity a bit -- but in context it absolutely works. And while I say something stretches credulity, I can't help but wonder if it really does. The actions of this particular supremacist group might not be that much different from the dreams of too many. Also, the race-based crimes, the murders, the vandalism -- everything that Paradise or Massachusetts can prosecute people for -- are not the biggest evil perpetrated by the members of that group. There's a deeper darkness working here, something that people with radically different views can also perpetrate -- Coleman could've gone the easy route and made it all about "Them," but he points at something that everyone can and should recoil from.

While Jesse works to prevent things from getting out of hand in Paradise, he is struggling to prevent himself from doing what he's so often done before -- retreat to the bottle. He has several reasons to, several excuses to -- and decades of experience telling him to do so. Fresh (Very, very fresh) off a stint at rehab, Jesse starts attending AA meetings (in Boston, nothing local that could cause problems for himself or anyone else in the meeting). I absolutely loved this part of the book -- I think Coleman's treatment of Jesse's drinking (and his various attempts to limit/stop it) has been so much better, realistic and helpful than anything that came before. <b>Colorblind</b> takes that another step up, and sets the character on a path that he needs to be on. Jesse's not a rock, but he's working on becoming one when it comes to this addiction. I don't know (don't want to know) where Coleman is going with this -- but I love it. Character growth/development, an actual healthy approach, and Coleman's own stamp on the series. Even if Jesse relapses in the future, he's actually been sober (not just taken a break from drinking) -- I love it (have I mentioned that?). It may have been a little too on-the-nose to have Jesse's new AA friend be named Bill, but, it made me smile.

As for the regulars -- we've got some good use of Healy (retirement can't stop him!); Lundquist is settling in nicely to this world (very glad about that, I've liked him since his intro back that other Parker series, whatever it was called); Molly was outstanding (it's hard to mis-write Molly, but it's very nice when it's done correctly); and Suit is still the guy you want riding shotgun when things get harry (ignoring the fact that someone else was actually carrying the shotgun when it came to it -- it's a metaphor, folks!). Surprisingly enough, given the B-Story, Dix doesn't make an appearance -- but Jesse can't stop thinking about him, so he's here, he's just "offscreen." That was a nice touch (and hopefully not too much of a spoiler), it'd have been very easy to have almost as much Dix in this book as Jesse. Coleman has not only got the original cast of characters done well, he's introduced a few of his own regulars and has merged them into this world well (e.g., Mayor Walker, Monty Bernstein). And it's not just characters he's blending, this book is full (not overstuffed) of call-backs to the oldest Stone novels as well as Coleman's -- this universe is alive and well and whole.

As far as the writing -- it's Reed Farrel Coleman, I really don't need to say anything else. I will say a little bit, though, he balances the various stories and tones of these stories well -- the book feels like a natural outgrowth of every book that came before, however minor the stylistic choices and depth have changed over the last few years. Parker could have written this. I don't think (especially in the latter years) he would have, but he could have. Yet, it's undeniably a Coleman book. It's impressive the way that Coleman can do this (see almost everyone that's tried a Bond novel [honestly haven't tried one in years, maybe someone has], or Robert Goldsborough to see that not everyone is capable of it). There is one moment, I thought, that Coleman faltered a bit and got into some pretty heavy editorializing -- if this was a first person book, it would have worked; or if he had been obviously channeling one of the characters, I wouldn't have said anything; but when your omniscient third-person narrator gets that opinionated, it's not good.

A solid crime story that resonates near the too-close-for-comfort zone given the cultural events (which probably is how some people felt with 1970's Parker), some great character development -- and plenty of fodder for Coleman's next (I ignored one storyline above because I don't think I can talk about it without ruining it). This is a must for Jesse Stone fans and a decent entry point for new readers, too -- it'll get you to go back and read at least a few older books (I'm more than willing to help a new reader with an "Essential Jesse Stone" reading list -- just let me know). Give this one a look folks, it deserves it.

<i><b>Disclaimer:</b> I received this eARC from Putnam Books via NetGalley in exchange for this post -- thanks to both for this. </i>