Pretty much everything goes wrong for everyone 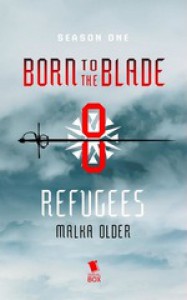 Argh. I just don't know what to say here -- clearly, this should've posted on Friday, but I only got one sentence down that I didn't delete. This is only posting today because I didn't let myself cut anything. This episode is too short, I think. When I consider everything I want to complain about, it all boils down to length (I'm not even seeing page counts on Amazon/Goodreads for the last couple of these). I do think the episode length is a legitimate problem, but at the same time, it's part of the design of the series, so I should just shut up about it.

Which is just a long way of saying, I think I liked this episode, but I'm not sure -- it sure didn't satisfy my need as a reader to get a chunk of story big enough to appreciate what's happening around these characters. I'm not saying these need to clock in at 250 pages or anything. Just 10-20% more?

Which is a crying shame -- because there's real opportunity in these pages for Michiko and Kris to get something done (both to help their people and the readers who like them as characters), but there wasn't time. Ojo doesn't seem like the same man anymore -- which is completely understandable, but I'm having to do too much surmising to get to my understanding. I did like Adechike's portion of this episode -- that was really well done.

Oh, and Lavinia continues to be just the worst person in this world. but that's not a surprise, really.

The action here revolves around this world preparing for the looming war -- I get why the characters don't know what actually happened to set off the conflict, but it'd be cool to let the readers in on the secret. There's preparations for war -- both in getting fighting forces ready, and refugees from affected/soon to be affected areas streaming into Twaa-Fei. Which is going pretty horribly -- between the stress that an influx of refugees brings to an area and a healthy dose of subterfuge on someone's part.

Speaking of Twaa-Fei, I'd have preferred to see more examples of this compact on between the nations working (however well it actually functions) before seeing it on the verge of collapse. It's hard to appreciate just what they're close to losing without seeing it more.

I'm still in this 'til the end, I think I'm still enjoying this -- but I feel the authors are holding out on us, which bothers me. I'm trusting they'll win me over (again) soon.