'Scuse me while I unleash my inner fanboy 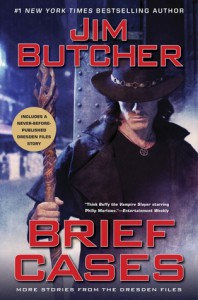 Being a wizard is all about being prepared. Well, that and magic, obviously.

Generally, when I start a book, my question is: how much am I going to like this? (Occasionally, the question is: I'm not going to hate this, am I?) But there are a few authors that I ask a different question with: How much am I going to love this book? Jim Butcher is probably at the top of the latter list, and the answers are typically: a lot, a considerable amount, and WOW, SO, SO, SO MUCH. I make no bones about it, I don't pretend to be anything like objective. I know he's not everyone's cup of tea, and I'm not looking to convince anyone to give him another shot (but I'm willing to give it a shot if someone wants me to), but for many, many reasons, I'm an unabashed and unashamed Jim Butcher fan and Brief Cases gives several reasons why I continue to be one.

Incidentally, I started this collection assuming the answer would be "a lot." It ended up being on the other end of the spectrum of love. I'll explain that shortly.

This is not a novel (alas!), it's another collection of short stories and novellas, like Side Jobs. It's been awhile since I've read or thought about that collection much, but I believe that this is a stronger batch on the whole. I've only read "Cold Case" from Shadowed Souls before, so this was a lot of new material for me -- and I enjoyed it immensely. It was great spending a few days in the pages and world of probably my favorite ongoing series.

Five of the twelve stories here were told from the point of view of a supporting character in the series. Anastasia Luccio told "A Fistful of Warlocks” about a little adventure she had in Dodge City, which opened the collection on a fun note; we got to know "Gentleman" John Marcone a little better than we wanted to in "Even Hand," (which doesn't mean I didn't enjoy the story). Molly got to shine in "Bombshells" and the aforementioned "Cold Case." And Waldo Butters' opening lines to "Day One" -- the tale of his first adventure as a Knight -- will go down as one of my favorite opening lines of 2018. I really got a kick out of all of these -- "Bombshells" and "Day One" were probably the most effective for me, but I'm not going to complain about any of the rest. Actually, after reading "Day One," I figured I got most of my money's worth just for that one.

Which leaves us with seven others from Harry's perspective -- there are the three Bigfoot stories that were published in various collections and then in Working for Bigfoot. I've been kicking myself for a while for being too budget-conscious to get that collection when it came out, yet unable to bring myself to get the e-book. Thankfully, I have them now -- and they were great. Not worth the $80 that used copies seem to go for now, but still pretty good. I really liked the characters in these stories and would gladly see them again. “Curses,” was a lot of fun; “AAAA Wizardry,” was a good story that I'm glad I read, but I can't say it was great; and “Jury Duty” was okay, but had its moments.

Which leaves us with "Zoo Day" -- the only original piece in this anthology, a novella about Harry taking Maggie and Mouse to the Zoo. And it was great. Just great. I know I've got a healthy dose of recency bias working here, but I think in 5 years if you ask me for my favorite pieces of Butcher writing that it will be in the Top 10 -- maybe Top 5. Watching Harry try to figure out how to be a good dad, while watching Maggie try to not drive him away, while Mouse just wants the two of them to understand each other . . . it just melts your heart. Yes, there's still supernatural and dark things afoot -- many of which we've never encountered before that could really mess things up for all three of these characters (and the rest of the Dresden Files cast, come to think of it) -- and there's at least one scene that creeped me out in a serious way. But mostly? I just loved the characters interacting with each other. My "Day One" affection and excitement remain intact, but they pale compared to what I thought about this novella. My notes (again, recency bias may play a role here) read, "A little slice of perfection. I didn't know a 50 page story could make me so misty-eyed and so happy all on its own." But it did, and I feel the heart-strings being tugged again as I write this.

Simply, this was a joy for me, and I imagine most Dresden Files fans would feel the same way. If you haven't read Jim Butcher's books about a Wizard P.I. yet, and have somehow read this far into the blog post, you really, really should. This collection isn't the place to start -- but it's a great place to hurry up and get to.