The beginning of a sweeping epic that came up snake eyes for me. 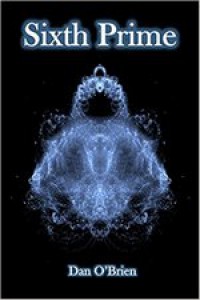 There's a danger that most readers have familiarity with -- a novelist oversharing the details of their worldbuilding so much so that it drags down the story and characters. The opposite danger isn't seen as often -- the writer withholding the details so much that you spend half your time figuring out what's happening, rather than paying attention to characters and plot. It's a tricky balance, no doubt -- and sometimes a novel can overcome an author falling into either ditch. <b>Sixth Prime</b> was not one of those success stories -- for whatever reason, to be careful, to be coy, because he didn't notice -- this book fell into the "not enough information" ditch, and couldn't find its way out of it.

There are a few storylines, somewhat connected -- it becomes somewhat clearer later how they are -- there's a murder investigation conducted by a corporation that supersedes the local authorities' own investigation; a high-ranking military official on trial (and the strange aftermath of that); a jail-break leading to another jail-break on its way to an assassination; a scientific exploration goes awry; and a couple of competing treasure hunters hunt for an artifact. Somehow these all connect to an interstellar war and forces as old as creation itself.

The characters were lifeless, little more than names and job titles -- with just a couple of exceptions. The characters in the murder investigation had promise -- and if this book had just focused on that storyline, this'd be a much different post. At least one of the characters in the treasure hunting story have promise (but the more villainous one was so over-the top that literal mustache twirling wouldn't have seemed out of place).

This entire novel seemed to be a set-up for the coming series -- not a novel that's part of a series. The various stories didn't have endings, there wasn't an overall arc to the novel that I could see -- the stories stopped, or "resolved" by authorial fiat, nothing organic. This is a problem -- I can accept not tying up everything in a tidy little bow, but there needs to be some sort of closure to a novel, some sort of point to that one thing. I'm not sure I'm being entirely fair here -- 1 or two of the stories might actually have had a decent resolution, but by that point, I was out of patience with the entire endeavor. A dynamite ending, or compelling hook could've saved it (I think), but they were nowhere to be found.

Nothing about this really worked for me -- one storyline came close -- but being surrounded by the rest, it never stood much of a chance. A little more restraint, a little more discipline -- maybe a longer book -- I don't know. There's something missing, I'm not sure what it was, really.

<i><b>Disclaimer:</b> I received this novel from the author in exchange for my honest opinion as reflected above. Sorry about that, Mr. O'Brien, but thanks anyway.</i>